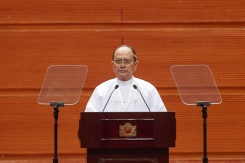 Myanmar's President Thein Sein delivers a speech during the opening ceremony of Union Peace Conference at the Myanmar International Convention Centre 2 (MICC-2) in Naypyidaw on January 12, 2016

The surprise move comes just days before the incumbent military-dominated parliament hands over to a legislature led by Aung San Suu Kyi's National League for Democracy party, as the balance of power begins to tilt partially away from the army for the first time in generations.

President's Office director Zaw Htay told AFP that Thein Sein had decided "to combine the ministry of immigration and population and ministry of home affairs" and had written to parliament asking for its approval.

It is expected to be discussed in the legislature on Wednesday.

If approved, the proposal would significantly add to the military's power even under an NLD government.

That is because the junta-drafted constitution puts the three major ministries of home affairs, border affairs and defence under army control.

Home affairs is already a ministerial juggernaut, with control over the police and huge swathes of the bureaucracy.

Suu Kyi and army chief Min Aung Hlaing held closed-door discussions in the capital Naypyidaw on Monday, the second such talks between the pair since the NLD won a huge victory in landmark November elections.

Observers see a rapprochement between Suu Kyi, 70, and the military as crucial to ensuring the delicate political handover stays on track as the new parliament prepares to select a president to replace Thein Sein in late March.

But Suu Kyi remains barred from top political office under the junta-era constitution because she married and had children with a foreigner.

She has pledged to rule "above" the next president, potentially alarming a military that kept her under house arrest for some 15 years under the former junta.

NLD spokesman Win Htein told AFP he was unaware of the president's proposal about the home affairs ministry.

"I only heard about it when you told me," he said late Tuesday.

Myanmar has several dozen ministries and the NLD has vowed that its government would streamline the bureaucracy.

But it is unclear whether the new NLD government would support a move that would augment the military's still substantial political influence, which also includes a reserved quarter of parliament's seats and an effective veto on constitutional change.

Thein Sein's plan would give the military control over immigration issues such as identity cards, visas and passport control, according to Zaw Htay.

He said the move was intended to reduce spending, "increase the focus on security" and strengthen border defence.