GENEVA - About 51,000 people have been displaced since Damascus, backed by Russian air strikes, launched its latest offensive on the Syrian city of Aleppo on February 1, the United Nations reported Thursday. 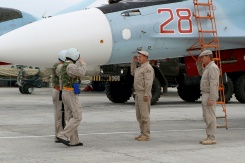 Russian warplanes have been conducting air strikes against Islamic State jihadists and other groups in Syria since September 30, 2015

"Since the latest offensive by Government forces began last week in the Governorate of Aleppo, reportedly accompanied by numerous air strikes by Russian and Syrian aircraft, some 51,000 civilians have been displaced and a further 300,000 are at risk of being placed under siege," UN human rights chief Zeid Ra'ad Al Hussein said in a statement.