WASHINGTON - Donald Trump warned Wednesday that "riots" could break out if he is denied the Republican presidential nomination despite having won most of the party's primary and caucus elections. 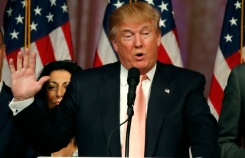 Republican presidential hopeful Donald Trump thanks supporters after victory in the Illinois, North Carolina and Florida primaries on March 15, 2016.

"We're way ahead of everybody. I don't think you can say that we don't get it automatically," Trump told CNN the morning after his latest round of election victories, in the states of Illinois, North Carolina and Florida.

"I think you would have riots," he said. "You know, I'm representing many, many millions of people."

Trump, who has never held elected office, has dominated the 2016 presidential campaign thus far with his bombastic style and his unexpectedly strong popularity with masses of American voters.

The billionaire businessman says many of his supporters -- disenfranchised Americans who normally steer clear of politics -- are already seething about what they perceive as a political and economic system that is rigged against them.

"These are people who haven't voted, because they didn't believe in the system, or didn't like candidates. They are 40, 50, and 60 years old and never voted. Many Democrats and many independents (are) coming in," he said.

But while Trump is the frontrunner for the nomination, political observers believe he may fall short of the 1,237 delegates needed for an outright win.

That could lead to a complicated process of horsetrading and backroom dealing at the party convention in Cleveland, Ohio this summer which supporters fear could result in someone other than Trump being named the Republican standard bearer.

"Now, if you disenfranchise those people and say, 'I'm sorry, you're 100 votes short, even though the next one is 500 votes short, I think you would see problems like you've never seen before. I think bad things would happen. I really do," he told CNN.

"I wouldn't lead it, but I think bad things would happen."

Trump's incendiary attacks on immigrants, threats of mass deportations and a proposal for a wall on the border with Mexico have ignited the campaign trail and drawn condemnation in some quarters, including President Barack Obama.

Protests at Trump rallies have sparked angry confrontations. A protester was punched as he was being evicted at one rally, clashes erupted at another, and a protester rushed Trump on the stage at a third.

The Finance Ministry is willing to expand eligibility for phase 3 of the Khon La Khrueng co-payment scheme beyond the original limit of 31 million people.

Five types of businesses and public establishments in Bangkok reopened on Monday under strict disease control regulations following a months-long shutdown due to the third wave of Covid-19.

Timely mass vaccinations and success of the sandbox model will determine whether tourism and aviation will see a rebound this year.

Maradona's nurse first to be questioned over his death