SYDNEY - Australia Thursday hailed its controversial regime of turning back asylum-seeker boats as a success after 600 days with no vessels arriving, and almost 700 people being repelled since the policy was launched. 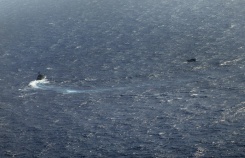 Under the hardline measures, asylum-seekers trying to reach Australia by boat are turned back to their country of departure or sent to remote Pacific island camps, where conditions have been criticised with allegations of rape and other abuse.

They are blocked from resettling in Australia even if they are found to be refugees in a policy the conservative government has defended as stopping deaths at sea.

"Tomorrow (Friday) marks 600 days since the last successful people-smuggling venture to our country and the government's absolutely determined to make sure that it stays that way," Immigration Minister Peter Dutton said in Canberra.

Since the start of "Operation Sovereign Borders" in September 2013 when the government came to power, 25 boats carrying 698 people had been turned back and "safely returned to their country of departure", Dutton added.

Rights groups have criticised camp conditions while doctors and whistleblowers have said the detention of asylum-seekers, particularly children, has left some struggling with mental health problems.

Amnesty has also called for an independent review into allegations that Australian authorities paid crew on a people-smuggling boat US$30,000 to return 65 asylum-seekers to Indonesia.

The policy has stoked tensions with Jakarta, which warned earlier this month after six Bangladeshi migrants were returned to the eastern Indonesian city of Kupang on a fishing boat that such operations were potentially dangerous.

A group of "potentially illegal immigrants" from Sri Lanka were returned to the South Asian nation in February, the operation's commander Major General Andrew Bottrell added at the press conference.

Bottrell said a further 57 people-smuggling activities were disrupted during this period, preventing 1,900 asylum-seekers from trying to head to Australia, but did not provide further details about where they were from.

He said that "people smuggling networks have been severely degraded".

Under the previous Labor government, at least 1,200 people died trying to reach Australia by boat between 2008 and 2013.

Dutton added he was "very proud" the number of children held in detention had fallen to just 29, and he was working to bring it down further. Detention levels are down from a record number of almost 2,000 children in June 2013.

However, allegations of rape and other abuse at the Nauru camp were raised at a parliamentary inquiry last year. A doctor who assessed inmates at the centre told the hearings living conditions were unsafe and put vulnerable women and children at "considerable" risk.