Sierra Leone Ebola flare-up over, virus no longer spreading: WHO

GENEVA - The latest flare-up of Ebola in Sierra Leone has ended, leaving no confirmed cases of the virus in West Africa, the UN said Thursday, hailing a "milestone" in the fight against the outbreak. 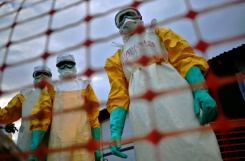 Guinea, Liberia and Sierra Leone were hardest-hit by the worst-ever Ebola outbreak, which killed more than 11,300 people

"The World Health Organization joins the government of Sierra Leone in marking the end of the recent flare-up of Ebola virus disease in the country," a statement said.