YANGON - An ethnic rebel group locked in conflict with Myanmar's military is eager to broker peace with the new civilian president, a spokesman said Saturday, as the incoming government gears up to tackle the country's long-running insurgencies. 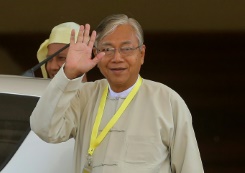 Htin Kyaw, newly elected president of Myanmar and member of the National League for Democracy party, leaves after a parliament session in Naypyidaw on March 15, 2016.

Myanmar's new leadership, steered by Aung San Suu Kyi and her presidential proxy Htin Kyaw, will take office at the end of the month, concluding a protracted power hand-off from the outgoing army-backed government.

One of their toughest tasks will be snuffing out civil wars between the national army and a patchwork of ethnic minorities in the resource-rich borderlands.

A recent surge of violence in northeastern Shan state, which has hosted multiple rebellions over the decades, has displaced more than 6,000 people since early February, according to the UN's Office for the Coordination of Humanitarian Affairs.

The fighting pits the military against the Ta'ang National Liberation Army (TNLA), one of several rebel armies that did not sign a broad ceasefire agreement pushed by the government last year.

On Saturday a TNLA spokesman said its people are wearied by the ongoing clashes and ready to work with the country's new civilian leader Htin Kyaw, who was elected in a parliamentary vote last week.

"The new government has offered hope not only for our ethnic people but also the whole nation. It is an elected government and they really know the people's wishes," Mai Aik Kyaw told AFP, adding that the outgoing administration, led by retired army generals-turned-politicians, had failed to bring the peace it promised.

Two other ethnic militias excluded from the army's recent peace talks also joined the TNLA in pledging support for the new president in a statement issued late Friday.

"Our armies are ready to find a real and better solution for ending the civil wars, seeing through a peace process and rebuilding Myanmar with the hope of national reconciliation by cooperating with the government of president U Htin Kyaw," said the statement from the TNLA, Myanmar National Democratic Alliance Army (MNDAA) and Arakan Army.

After a landslide win in the freest election in generations last November, Suu Kyi's National League for Democracy (NLD) party is carrying the hopes of millions in a country beaten down by nearly half a century of repressive military rule.

The incoming government has vowed to make peace a priority of their administration and announced plans on Thursday to create a new ministry for ethnic affairs.

But a crucial challenge will be smoothing relations with the military, which has retained a significant wedge of political power and holds the keys to securing a lasting peace.