NEW YORK - Overshadowed in history books by the communist witch-hunt, the McCarthyist era's "Lavender Scare" destroyed even more lives as the US government outed and fired thousands of gays and lesbians. 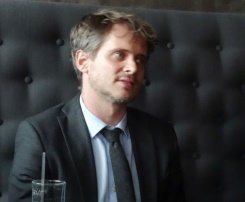 Composer Gregory Spears speaks after a preview of his new opera "Fellow Travelers" at the National Sawdust music venue in New York City on March 20, 2016

A new opera aims to throw a new spotlight on the dark chapter of the 1950s, recreating a story of dangerous, illicit love for audiences that have seen major advances in gay rights.

"Fellow Travelers," which will premiere on June 17 at Cincinnati Opera, takes place in the backdrop of the rise of Joe McCarthy, the Republican senator from Wisconsin who waged a vicious campaign against supposed subversives.

"Fellow Travelers" charts the furtive romance between Fuller, portrayed by baritone Joseph Lattanzi, and Laughlin, who not only needs to evade scrutiny of his private life as he starts a Washington career but also wrestles with his Roman Catholic faith's condemnation of homosexuality.

"It's just a story that hasn't been told," director Kevin Newbury said after a preview of "Fellow Travelers" in New York on Sunday.

"There are all sorts of dramatic works on stage or on screen about the Red Scare or about communism but the Lavender Scare has received relatively little attention."

Historians estimate that at least 10,000 suspected gays and lesbians lost their jobs, some driven to suicide, after being outed, far more than the number of US government employees explicitly accused of communism.

While McCarthy was soon discredited, the United States did not fully lift its ban on gay government employees until 1995 under president Bill Clinton.

Nonetheless, activists note that most US states do not legally protect gays, lesbians and transgender people from job discrimination.

Composed by Gregory Spears, known for his minimalism and interest in early music, "Fellow Travelers" is set to a chamber orchestra of 17 players including strings, piano and two trombones.

"Fellow Travelers" culminates in a despondent aria between the two main characters which Spears said was inspired by the troubadours, the lyrical poets of late medieval France.

Troubadour music "really intrigued me because it sounds extraordinarily old but it also sounds a little bit like pop music," he said.

"Part of what attracted me to this story is this notion of forbidden love," he said. "And the troubadour goes to the castle and sings about love."

Yet "Fellow Travelers" is hardly a straight-forward love story. It ends in a tragic twist with the destruction of Laughlin, who is turned in by Fuller himself, who has married a woman and wants to end his gay double life.

Librettist Greg Pierce, a playwright whose past works include an adaptation of Haruki Murakami's novel "The Wind-Up Bird Chronicle," said he was eager for nuance after so many years in which gays were portrayed in literature as psychotic killers or as persecuted victims.

"This time, you have gay people who are real people," he said.

The work is based on the 2007 novel "Fellow Travelers" by Thomas Mallon, who is known for his historical fiction but admitted that when he was approached with the idea of the adaptation he was not well-versed in opera.

"I think I said something like, 'You want to make an opera out of this? You mean the book isn't gay enough already?'" he deadpanned.

Mallon, 64, said the tensions in "Fellow Travelers" also reflected the post-World War II ethnic backdrop in which Irish Catholics were seen as "sort of super Americans" who would be tough on communism.

Homosexuality was widely taboo in the 1950s, with the American Psychiatric Association classifying it as a mental disorder until 1973, yet the US government also justified its ban on the grounds that gays in sensitive jobs would face blackmail.

Mallon said he hoped to show in Laughlin the deep ambivalence of men who, while gay, were sincere in their faith and opposition to communism.

"I think I said (to the opera creators) my only advice -- my only hope -- is don't make his politics and religion a joke."

The first batch of 1.5 million Pfizer vaccine doses donated by the US is scheduled to arrive in Thailand on Friday under a US government Covid-19 assistance programme.

Road to ruin: Double tax and bandits on the Pakistan-Afghan trade route