TOKYO - Fresh from his Oscar-winning role in "The Revenant," Leonardo DiCaprio suggested Wednesday that his upcoming documentary on climate change could help raise awareness about a phenomenon that some US presidential candidates reject. 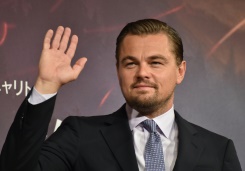 Oscar-winning actor Leonardo DiCaprio attends a press conference to promote "The Revenant" in Tokyo on March 23, 2016

DiCaprio said one of the collaborators for the film to be released before the November election was Fisher Stevens, a producer of the 2010 Oscar-winning documentary "The Cove" about dolphin-killing in the small Japanese town of Taiji.

"We've been travelling around the world documenting climate change," DiCaprio told a press conference in Tokyo, adding they visited China, India and the North Pole and South Pole.

Though he did not offer any names, the star of "Titanic" and "The Wolf of Wall Street" said some candidates seeking the highest US office are falling short in their environmental attitudes.

"We should not have a candidate who doesn't believe in modern science to be leading our country," he said.

"Climate change is one of the most concerning issues facing all humanity and the United States needs to do its part."

Republican front-runner Donald Trump said last year he did not believe in climate change, while his key rival Ted Cruz has dismissed it as "pseudo-scientific theory".

DiCaprio, who attended the COP21 climate change talks in Paris last year, has been raising the alarm on global warming since 1998 when he founded the Leonardo DiCaprio Foundation.

The organisation is involved in 78 projects on protecting biodiversity, oceans conservation, wildlands conservation and climate change, according to its website.

The actor said "The Revenant" -- about a 19th century fur trapper filmed under extreme winter conditions in Canada and Argentina -- was "a turning point" for him personally, in that he noticed how much nature is changing.

"I look back on this time period with great reflection and great concern as well."