PARIS - French lawmakers passed a controversial law that makes it illegal to pay for sex and imposes fines of up to 3,750 euros ($4,270) on prostitutes' clients. 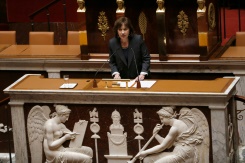 Minister for the Family, Children and Women's Rights, Laurence Rossignol speaks during a debate on a law that would make it illegal to pay for sex, on April 6, 2016 at the National Assembly in Paris

Around 60 sex workers staged a noisy protest outside parliament during the final debate on the bill that will affect the livelihoods of at least 30,000 prostitutes in France, four in five of whom are foreign.

Some carried a banner reading "Don't liberate me, I'll take care of myself!", while another poster read, in English, "Sex work is work".

Backed by the Socialist government, the legislation has been nearly two and a half years in the making.

All European countries penalise pimping, but France will become only the fifth to punish the clients of prostitutes, along with Sweden, Norway, Iceland and Britain.

Sweden in 1999 became the first country in the world to make it illegal to pay for sex, in a bid to lower demand.

In France, predominantly right-wing senators have opposed the ban on paying for sex, which will be punishable by a 1,500-euro fine for first offenders, increasing to 3,750 euros for repeat offenders.

But after previous debates in both chambers of parliament ended in deadlock, the lower house, dominated by the left, had the final say.

The proposal introduced in October 2013 has divided public opinion in France, prompting a group of 343 public figures to issue what they called a "scumbags' manifesto" asserting the right to use prostitutes.

The signatories, who included journalists, writers and actors, said they resented being depicted as "perverts or psychopaths" and refused to allow "deputies (to) legislate norms on our desires and our pleasures".

Socialist lawmaker Maud Olivier, the architect of the bill, has argued repeatedly that prostitutes should be seen as "victims and no longer as delinquents".

The new law will supersede a little enforced 2003 measure penalising the solicitation of clients for sex.

"This law is essential to ending the idea that it is normal to buy someone's body," Olivier told AFP. "We will succeed in changing the mentality, but new efforts are needed to raise awareness, to train police officers and magistrates."

The new law will also require offenders to take a course to learn about the conditions faced by sex workers.

The bill calls for measures -- backed by an annual budget of 4.8 million euros -- to help prostitutes find other jobs and a six-month residency permit for foreign sex workers.

The bulk of sex workers in France are from eastern Europe, Africa, China and Latin America.

The law will "increase police repression (and) degrade working conditions" a member of the Strass sex workers union said at Wednesday's protest.

Around 20 people held a counter-demonstration nearby waving a banner reading "Prostitution, Just One Option, Abolition".

On Tuesday, 13 associations that support prostitutes joined forces to condemn the law which they said threatened the livelihoods of sex workers and was "essentially repressive".

"We already see the consequences. Those who can afford to have left for neighbouring countries, while others are looking for... procurers to put them in contact with clients," said Morgane Merteuil, another Strass member said earlier.

Critics also point to the difficulty of proving payment for sex, since the money usually changes hands in private.

And those who buy sex over the Internet are unlikely to be caught by the new law, experts say.

"Dating websites are one of the main ways to connect prostitutes and clients," said sociologist Laurent Melito. "Then people call each other. How are you going to control that?"

The kinds of algorithms used to block child pornography and jihadist recruitment cannot be used to combat prostitution because the "risk of error" is too great, communications researcher Olivier Ertzscheid told AFP.

HONG KONG: Asian markets tumbled again Tuesday, extending a global sell-off as the toll from a rapidly spreading Chinese virus spiked to more than 100 dead and thousands infected, with investors fretting over the impact on an already fragile world economy.

SAMUT PRAKAN: A Buddhist rite was held on Monday for the dead Bruda whale found washed aground in a mangrove forest at Bang Poo area in Muang district on Sunday.

Extremely unsafe levels of fine dust were detected in the northern province of Lampang and nearby provinces this morning, with the worst in Lampang's Mae Mo district, the Pollution Control Department rep;orted.