SINGAPORE - Oil prices plunged on Monday after the world's top producers failed to reach an agreement on capping output and easing a global supply glut at a meeting in Doha. 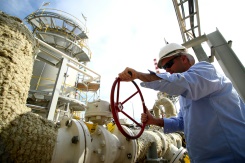 The collapse of Sunday talks in Doha sent oil tumbling in Asia trade early on April 18, 2016

Hopes the world's largest producer cartel, OPEC, and other major producers like Russia would agree to freeze output has helped scrape oil prices off the 13-year lows they touched in February.

But crude tanked after top producer Saudi Arabia walked away from the agreement, which many hoped would ease a huge surplus in world supplies, after rival Iran boycotted the meeting.

The collapse of Sunday's talks sent oil tumbling in early Asia trade, with prices sliding as much as seven percent in opening deals.

"Despite many of the 18 oil producers believing the meeting in Doha was merely a rubber stamp affair for an oil production freeze, Saudi Arabia managed to throw a spanner in the works," said Angus Nicholson, an analyst at IG Markets.

"With Saudi Arabia fighting proxy wars with Iran in Yemen and Syria/Iraq, it is understandable that they had little inclination to freeze their own production and make way for newly sanctions-free Iran to increase their market share."