Witnesses to a boat capsize that left some 20 people dead, including children, say the victims were from the persecuted Rohingya Muslim minority and blamed the tragedy on travel restrictions that forced them to journey by sea.

At least 21 people, including nine children, died after a packed boat capsized in choppy waters on Tuesday as it approached the Rakhine state capital of Sittwe, according to the United Nations.

Most of the passengers were inhabitants of Sin Tet Maw, in Paukaw township, a camp for Rohingya Muslim minority members forced from their homes by bouts of communal violence.

"It (the boat accident) happened because of unsafe transport... we cannot use direct transport (overland) to Sittwe to buy goods or medicine," Rohingya activist, Kyaw Hla Aung, told AFP from Sittwe.

The boat's passengers had received special permission to travel by boat to the market in Sittwe from Paukaw -- a journey through the mouth of a wide river that then skirts several kilometres around the coast to the capital.

Photographs showed locals carrying the dead and injured to shore on makeshift gurneys.

More than 100,000 Rohingya have been forced to live in apartheid-like conditions since unrest between Buddhists and Muslims left hundreds dead in 2012.

Their movement and access to services, including healthcare, is severely restricted by authorities in the Buddhist-majority country.

The activist said he had counted 22 bodies in Sittwe and they all were Rohingya.

Another Rohingya man, Tin Hla, who also lives in the camp of 1,500 people, said his son was unaccounted for among the boat passengers. 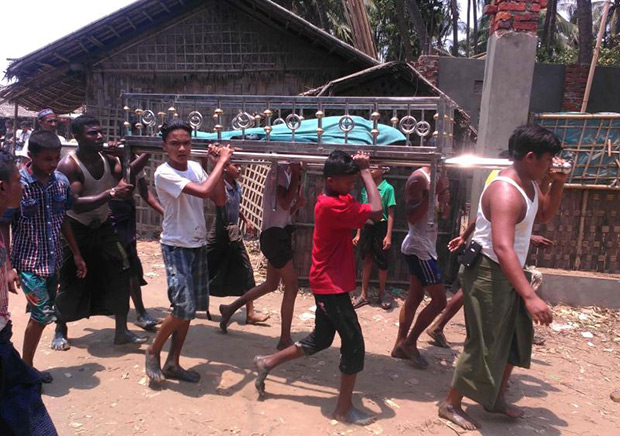 "When we need to go to Sittwe, we have to go there in an unsafe way (by sea)," he said, adding that he fears the worst for his son and had travelled to Sittwe to find his body.

Myanmar does not formally recognise the Rohingya as one of the country's patchwork of ethnic minorities.

A rising tide of Buddhist nationalism has in recent years deepened hostility towards the group -- most of whom are rendered stateless by a web of citizenship laws.

Many Rohingya trace their roots in the country back for generations.

But officials routinely refer to them as "Bengalis" -- a pejorative term identifying them as outsiders from neighbouring Bangladesh.

"This accident serves as a tragic reminder of the vulnerability that many communities and families face in this area of Rakhine," said Janet Jackson, the UN's resident and humanitarian co-ordinator in Myanmar.

"Their only option is to use this mode of travel in order to access livelihoods, and other basic services that are essential for a dignified life."

The deprivations of camp life has led thousands of the minority group to take to the sea in crammed boats, seeking sanctuary in Muslim-majority Malaysia and Indonesia.

They were among the victims of last year's Southeast Asian migrant crisis which saw trafficking networks suddenly unravel, leaving thousands of Rohingya and Bangladeshi migrants stranded without food at sea.

Pro-democracy leader Aung San Suu Kyi has come under pressure for failing to speak up for the rights of the much-maligned Rohingya.

She has however vowed to press for greater autonomy for other ethnic minorities.