UNITED NATIONS (UNITED STATES) - With their very existence under threat from climate change, the world's island states come to the United Nations on Friday not only to sign the Paris climate deal but to be first in line to make sure it goes into force. 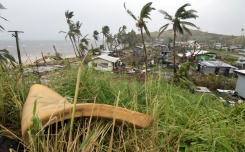 Tropical Cyclone Winston, the strongest ever to hit the south Pacific, affected some 250,000 people, or 40 percent of the regional population

Led by Fiji, at least nine islands will formally present their ratification of the agreement to the United Nations, moving quickly to the next stage in a bid to bind countries to their commitments to tackle global warming.

The Paris agreement will come into force as soon as 55 countries responsible for 55 percent of the world's greenhouse gases have ratified the accord.

"We wanted to be the first to ratify it," said Fiji's Prime Minister Josaia Voreqe Bainimarama, whose cabinet quickly endorsed the deal, followed by the parliament in February.

That same month, the Pacific paradise island was hit by Tropical Cyclone Winston that killed 44 people, destroyed 40,000 homes and caused more than $1 billion in damage.

"A single climatic event can wipe out all the gains we have made and set back our development," the prime minister told a news conference.

Other early ratifiers of the deal will be Tuvalu, Kiribati and the Maldives - low-lying islands that face oblivion from rising sea levels -- as well as Belize, Barbados, Nauru, Saint Lucia and Samoa.

China and the United States, the world's top two greenhouse gas emitters, are pushing for quick ratification so that the Paris deal can come into force, possibly as early as 2016 or 2017.

More than 160 governments, including some 50 heads of state and government, are to sign the historic accord during the ceremony on Earth Day.

It will be the largest signing of an international agreement since the Convention on the Law of the Sea in 1982.

French President Francois Hollande will be the first to sign the accord, but the ceremony will also see island leaders take the podium to appeal for urgent action to ratify the Paris accord.

"What was achieved in Paris was a positive first step, but it is not nearly enough to avert catastrophe," the Fijian prime minister said.

Fiji and other island states want to keep global warming within 1.5 degrees Celsius above pre-industrial levels, instead of 2 degrees as outlined in the Paris accord.

Island governments want to unlock international financing so that they can better prepare their economies and infrastructure to withstand the impact of climate change.

Tropical Cyclone Winston, the strongest ever to hit the south Pacific, affected some 250,000 people, or 40 percent of the regional population.

"We've received some 1,000 earthquake tremors, so we are fairly worried about earthquakes and tsunamis," he said.