PALMYRA (SYRIA) - When two Polish heritage experts first restored the famed lion statue in Syria's Palmyra in 2005, they never imagined they would see it smashed to pieces only a decade later. 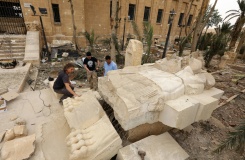 Bartosz Markowski (L), from the University of Warsaw's archeology institute, and Robert Zukowski (C), from the Polish Academy of Sciences, inspect a statue at Palmyra museum on April 9, 2016

"We did new restoration, new presentation of this lion, the Lion of Al-Lat. And after, I thought, I'm doing this (to last) for over 200 years or 300 years, maybe more," archaeologist Bartosz Markowski told AFP.

Markowski spoke to AFP at the entrance of Palmyra's museum, where the striking 15-tonne Lion of Al-Lat lay in large, jagged pieces.

It was smashed by the Islamic State group, which overran Palmyra -- known as the "Pearl of the Desert" -- in May 2015.

During their 10-month rule over the city, the jihadists executed hundreds of civilians and blew up some of Palmyra's most beautiful temples and funerary towers in the old city.

Palmyra's museum lies in the residential parts of the city.

The destroyed Lion of Al-Lat at the museum's entrance serves as a harbinger for the destruction inside: statues lay in pieces blanketed in dust and debris.

Syria's government forces recaptured the city on March 27, and experts immediately set to work assessing the damage to the city's historic ruins.

Markowski, from the University of Warsaw's archaeology institute, was the first foreign archaeologist to enter Palmyra after the regime win.

He arrived in Palmyra with his colleague Robert Zukowski, from the Polish Academy of Sciences, in mid-April for a one-week mission to evaluate the damage.

The three-metre-tall Lion of Al-Lat dated back to the 1st century BC.

It was first discovered in 1977 by a Polish archaeological mission at the temple of Al-Lat, a pre-Islamic Arabian goddess.

"This lion is like our baby. We have had a sentimental relationship with this statue ever since we came in 2005 to help restore Palmyra," Markowski said.

As soon as he and Zukowski heard IS was pushed out of Palmyra, "we decided to return at the invitation of the Directorate of Antiquities and Museums of Syria," he added.

Markowski said he felt he "had to come back as soon as possible."

"We were excited because we had not seen any photos since one year, or almost one year, since Daesh came here," he said, using an Arabic acronym for IS.

"The first pictures that we saw (were from) one week ago. And we saw that there is something to do here."

He told his wife he was travelling to Egypt, "because she would not have let me leave if she knew I was coming to Palmyra."

More than 270,000 people have been killed and millions have been forced to flee their homes since the conflict erupted in March 2011.

After being catalogued by Markowski, each piece was carefully carried by Zukowski and a Syrian colleague into large boxes.

The containers will head to Damascus, where restoration can begin.

His hands covered in blisters, Zukowski took a photograph of each broken slab of rock.

"You know I'm proud -- I'm really proud that we can come back here," Zukowski said.

He said he was confident that the lion could be restored to its previous glory but the most difficult parts to restore would be around its nostrils.

Since the Syrian regime pushed IS out of Palmyra last month, deminers -- including from a special unit dispatched by Moscow -- have been clearing explosives from Palmyra's old city.

Zukowski and Markowski had yet to assess the damage there, where the grand Temples of Bel and Baalshamin once stood, now largely reduced to rubble.

The heaviest fighting between IS and Syria's government fighters took place in the modern part of Palmyra.

Although residents have slowly begun returning to rebuild their homes and their lives, the residential neighbourhoods remain eerily quiet.

"It needs people in the town. Now it's deserted, there is no one here. Only army and some reporters. And two crazy restorers," Markowski said.