Romania barred from Eurovision for back debts
World

Romania barred from Eurovision for back debts

STOCKHOLM - Romania has been barred from this year's Eurovision Song Contest for failing to pay millions in debts to the European Broadcasting Union, the EBU said Friday. 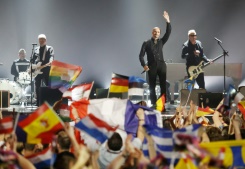 Romanian band Voltaj perform during the first semi-final of the Eurovision Song Contest (ESC) in Vienna on May 19, 2015

The EBU, which organises the contest which this year culminates in a final on May 14 in Stockholm, said Romania's struggling state broadcaster TVR owes it 16 million Swiss francs (14.5 million euros, $16.3 million), debts that have accumulated over several years.

Romania was to be represented at the event by Ovidiu Anton with his English-language song, "Moment of Silence", but the entry will now be forced out of the lineup.

"It is regrettable that we are forced to take this action," EBU Director General Ingrid Deltenre said in a statement.

"We are disappointed that all our attempts to resolve this matter have received no response from the Romanian government.

"The continued indebtedness of TVR jeopardises the financial stability of the EBU itself," Deltenre said.

She said the EBU has noted that TVR was facing possible insolvency.

But numerous attempts were made to restructure the debt and payment plans were agreed upon, but had not been adhered to.

The organisation had written to the Romanian government on four occasions this year, but had received no reply, the EBU said in a statement.

On Monday, Romania's Prime Minister Dacian Ciolos said the government would be seeking to broker a solution to avoid being locked out of a competition watched by a global audience of 197 million last year.

Then, in a final letter to the Romanian finance minister sent on April 15, the EBU requested a payment of 9.2 million euros to be received in the EBU's bank account by close of business on Wednesday, April 20, 2016.

The deadline was then extended until Thursday, April 21 but no payment was received, according to EBU.