MILAN - Animal rights group PETA said Thursday it has acquired shares in Prada to pursue its protest over ostrich leather handbags from inside the luxury fashion group. 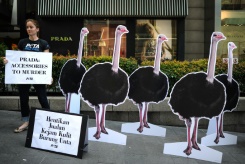 Manager of international operations for PETA, Ashley Fruno, displays a sign next to paper cut-outs of ostriches in front of a Prada store, during a protest in Kuala Lumpur, Malaysia on April 19, 2016

PETA (People for the Ethical Treatment of Animals) said the move followed an investigation which revealed that ostriches as young as one were being slaughtered in South Africa to produce the "goose bump" leather the company uses for its costly bags.

"Every Prada goose bump bag means a young ostrich has been turned upside down in a stunner then ejected to have their throats cut and be plucked in a miserable and terrifying slaughter," said PETA's Mimi Bekhechi.

"PETA USA is taking the fight against cruelty into Prada meeting rooms where it will able to ask the company to end forever the use of ostrich leather in its bags."

Prada did not respond to AFP's request for comment on the move.

PETA is also calling on French luxury goods group Hermes to end its use of ostrich leather in its bags, including some models named Birkin bags after model and actress Jane Birkin.

In the wild, ostrich chicks stay with their parents up to the age of three.

On farms where they are bred for their meat, leather and feathers, the young are usually separated from their parents at birth and kept in feedlots until being dispatched to the abattoir.