SYDNEY - Dubbed "Carpageddon" and backed by the man who threatened to kill Johnny Depp's dogs, the latest plan to control introduced species in Australia will use the herpes virus to eradicate millions of predatory fish. 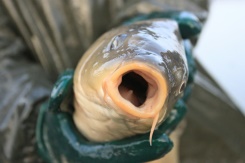 The National Carp Control Plan will cost Aus$15 million (US$11 million) to spread the virus through the aggressive common carp, introduced to Australia in the mid-1800s.

And it has brought Agriculture Minister Barnaby Joyce another brush with notoriety after his threat last year to put down Hollywood star Depp's dogs after he and wife Amber Heard breached Australia's quarantine laws.

Joyce strutted and yelled in an extraordinary show in parliament on Monday when he reported the carp scheme to members.

In a booming rasp, the red-faced Joyce branded the fish "disgusting mud-sucking creatures", and kept shouting "CAAARP" and "venereal disease" to the amusement of some MPs.

"Carp are the worst freshwater aquatic pest in Australia," he said in a statement, estimating the cost to the economy at Aus$500 million a year.

"Current control measures, including trapping, commercial fishing and exclusion, are expensive and largely ineffective at controlling carp over large areas or for any length of time."

But the virus developed in Israel had worked elsewhere.

"We've seen in lakes, in Japan, lakes that are multiple times the size of Sydney Harbour, we've lost 70 percent of the European carp in two weeks," Joyce said.

According to Science Minister Christopher Pyne, who came up with "Carpageddon", the virus has no impact on humans and is carp specific.

"Suddenly, there will be literally hundreds of thousands, if not millions of tonnes of carp that will be dead in the River Murray," Pyne said.

Carp account for 80-90% of the fish biomass in southeastern Australia's Murray-Darling river system.

The plan hopes to wipe out 95% of them over 30 years and allow native species such as silver perch and Murray cod to thrive.

The virus attacks the carp's kidneys, skin, gills and stops them breathing.

"They have the virus for a week before they show any symptoms and it suddenly kills them within 24 hours," said Pyne.

Carp have spread across Australia, except the Northern Territory.