LONDON - People in China, Germany and Britain were ranked as the world's most welcoming to refugees in findings published by human rights organisation Amnesty International Thursday. 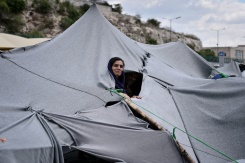 In China, which was ranked as the most welcoming country, 46 percent of people said they would take refugees into their own home

Residents of Russia, Indonesia and Thailand were considered the least welcoming out of 27 countries in the Refugees Welcome Index, which measured public levels of acceptance of refugees.

The index ranked nations on a sliding scale of how willing citizens said they were to welcome refugees into their homes, neighbourhoods, cities, towns or villages and countries.

Around the world, it found that one person in 10 would be prepared to take refugees into their homes.

"People are ready to make refugees welcome," he said, but governments' inhumane response to the refugee crisis is "badly out of touch with the views of their own citizens."

The five-year long conflict in Syria, which has claimed around 270,000 lives, has sparked a major refugee crisis in the Middle East and Europe as people flee the fighting.

Millions more people are displaced around the world each year by conflict and disaster.

In China, which was ranked as the most welcoming country, 46 percent of people said they would take refugees into their own home.

Those in Britain were the second most willing to do so at 29 percent.

While one in 10 Germans said they would accept refugees into their homes, 56 percent said they were welcome in their neighbourhood and 96 percent in their country.

In Russia, where people were ranked as the least welcoming, 61 percent said they would refuse refugees access to their country.

Shetty said there was a "general feeling that the West has not delivered" in helping refugees.

"I would expect that the Chinese population is sending a message, you know, we would welcome them," he told AFP.

"Now of course, this doesn't mean that China has taken many refugees so it's time for the government to do something about it."

The survey of more than 27,000 people was conducted for Amnesty by strategy consultancy GlobeScan.