LOS ANGELES - Slumped on a terracotta rooftop, Pablo Escobar succumbs to multiple bullet wounds, blood leaching from his chest, signaling the end of the drug lord's reign of terror in Colombia. 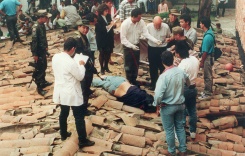 The body of Medellin drug cartel leader Pablo Escobar (C) lies on the roof of a house in December, 1993 moments after he was gunned down by Colombian police while trying to escape authorities

The death of the feared Medellin Cartel's "Don Pablo" has been recreated in painstaking detail by the cast and crew of Netflix hit "Narcos," its showrunner revealed after filming wrapped on the second season.

"Escobar had a photographer who was with him and there are incredible photos taken by DEA agent Steve Murphy at the time of his death," executive producer Eric Newman told AFP ahead of a discussion panel in Hollywood.

"We've recreated the actual death scenario based on those pictures so it's as close as we can be."

The Colombian farmer's son who became the world's seventh-richest man with his ruthless dominance of the global cocaine trade was hunted for years before police killed him in his hometown of Medellin in 1993.

During the height of its operations, the Medellin Cartel brought in more than $60 million a day, providing 80 percent of the cocaine smuggled into the United States.

The Colombian police hunted the so-called King of Cocaine as he attempted to evade capture for 18 months after breaking out of prison.

He and his bodyguard exchanged heavy gunfire with officers trained by US special forces until he fell on the terracotta tiles, bleeding from hits to the leg and torso.

A wound near his ear has long been the subject of controversy, with speculation rife that he may have been shot at close range in a summary execution as he lay bleeding.

Members of Escobar's family claim he turned his gun on himself rather than be captured.

"Narcos" tells of his rise and fall, but also the larger story of America's "war on drugs" and the Drug Enforcement Administration's battle with the criminal underworld.

"We really wanted to embrace the Colombian contribution to bringing down Escobar," Newman said. "They did incredibly brave things and died at an alarming rate."

Although Netflix has kept details of the second season of "Narcos" under wraps, it is understood that the shows will be available for the streaming service's 81 million subscribers in August, with the death scene in the finale.

Newman spent 20 years researching Escobar, tracking down DEA agents Steve Murphy and Javier Pena, the lead investigators in the manhunt, both of whom eventually retired and became consultants on the show.

"They got us access to every level of the Colombian law enforcement system, guys who hunted these guys down and killed them," he told AFP.

The show has been praised for presenting a nuanced portrait of Escobar, who never forgot his roots but who is also said to have flirted with the idea of becoming president.

Comparisons in the media with the rise of presumptive Republican presidential candidate Donald Trump in the US followed the airing of the first season last year.

"I think Pablo Escobar was a much more successful businessman than Donald Trump," Newman told AFP.

"Politics is a circus and the narcotics business is a circus," he said. "Megalomania will get you to do a lot of different things, lot of self-aggrandizement, and I think they're probably similar in that respect."

For Brazilian actor Wagner Moura, it was important to portray Escobar as a human being, with many terrible character traits but also aspects to his personality anyone might have.

"He was a very complex person," he said. "Of course he was evil -- he was an evil, mean person -- but at the same time... I'm sure Osama Bin Laden had friends, people that liked him."

Obsession with Escobar -- the subject of numerous films and TV shows -- may soon face competition from Joaquin "El Chapo" Guzman, Mexico's answer to the drug baron, whose life is being turned into a drama series by Chris Brancato, co-creator of "Narcos."

"All of us, people that love following the law," Moura said, "we have a fascination with people that don't, people who live above the law."

LONDON - A replica of an Aston Martin DB5 used for the stunts in James Bond blockbuster "No Time to Die" sold for nearly £3 million (124 million baht) at auction on Wednesday, auction house Christie's said.