NEW YORK - Investors of ExxonMobil and Chevron vote at annual shareholder meetings Wednesday on whether the two oil giants should do more to address climate change following a historic global climate agreement. 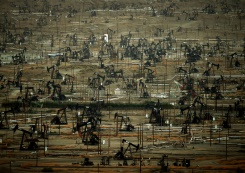 Shareholder votes in Dallas, Texas, near ExxonMobil headquarters, and at Chevron's San Ramon, California, headquarters will be closely watched in light of the December agreement reached in Paris, in which nearly 200 governments pledged measures to cap global warming.

Environmentalists believe climate change may be at a tipping point for shareholders of Big Oil, who have enjoyed a reliable stream of dividend checks as the oil giants have racked up profits.

"We have a breakthrough this year," said Anne Simpson, director of investment at Calpers, the public employees retirement system for the state of California.

"We really have to step up and make sure that companies are in sync. They have to stop looking backward."

Under a proposal by New York state's retirement fund, ExxonMobil and Chevron would be directed to publish the results of an annual climate "stress test" of how changing public policies affect their assets and long-term business prospects.

A second proposal stipulates that the two oil companies should enact policies to ensure that global temperatures do not rise more than two degrees Celsius (3.6 degrees Fahrenheit) above the pre-industrial level, as agreed in the Paris pact.

Environmentalists have called on the oil giants to champion renewable energy and stop producing fossil fuels, arguing in part that the long-term viability of oil will be undermined by climate mitigation policies.

Addressing climate change is "a real issue of financial risk," said Edward Mason, head of responsible investments at the Church of England.

"We hope that this vote will be the moment when shareholders give an unequivocal signal that, following the Paris agreement, the time for climate risk reporting has arrived."

The oil giants, which have successfully beaten back shareholder proposals on climate change in prior years, argue the latest measures are unnecessary.

ExxonMobil says it has already built in stricter climate policies into economic planning and that progress is being made in part because of the company's investments in technology.

"It is equally essential that society manages the risk of climate change by increasing energy efficiency and by investing in research into technology solutions to reduce greenhouse-gas emissions," said Jeff Woodbury, vice president of investor relations at ExxonMobil.

"Our outlook by no means represents a 'business as usual' case and is generally consistent with other forecasting organizations, such as the International Energy Agency."

ExxonMobil has faced increased scrutiny over the last year following news investigations that accused the oil giant of waging a deceitful publicity war against climate science.

Chevron also said it is addressing climate change in its policies and that a stress test is based upon "the flawed premise" that tough policies will adversely affect all fossil fuel producers to the same extent.

"We believe that Chevron is a capable and efficient producer, well-positioned to compete in any supply-and-demand scenario," it said in its proxy statement.

The climate measures have won support from 50 large shareholders with more than $10 trillion in assets, said Andrew Logan of the environmental group Ceres, which is coordinating the campaigns against ExxonMobil and Chevron.

These include Norway's sovereign wealth fund, the world's largest; French banks BNP Paribas and Natixis; and insurers Axa and Aegon.

Also backing the measure are prestigious universities such as Harvard, Yale and Oxford, and shareholder advisory firms Investor Shareholder Services and Glass Lewis.

But crucial to the outcome will be the vote of big investment companies such as Vanguard, BlackRock and State Street, which hold hundreds of millions of shares in oil companies.

Bill McNabb, head of Vanguard, which owns about 6.5 percent of both ExxonMobil and Chevron, has said that shareholders are more likely to effect change by working with the company rather than trying to send a message with a vote.

But Pete Grannis, a deputy comptroller of New York state, said there may be victory even in defeat.

"Win or lose clearly the message is out there that there are number of investors that have concerns about this," he said.

The results of Wednesday's votes are not binding, but ExxonMobil and Chevron have said they will reexamine their policies if the climate measures garner more than 50 percent support.