VILNIUS - Germany says the EU is facing difficult talks on extending sanctions against Russia over the conflict in Ukraine due to the increased resistance of some member states, according to an interview released Thursday. 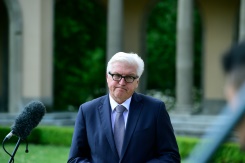 German Foreign Minister Frank-Walter Steinmeier also told the Baltic News Service (BNS) that the West needed to engage in dialogue with Russia to "rebuild" lost trust and tackle crises in Syria and Libya.

Steinmeier, who is to hold talks in Vilnius and Riga on Thursday with Baltic partners Lithuania and Latvia focused on NATO's July summit in Warsaw, said "we are aware that resistance in the EU to extending the sanctions towards Russia has increased.

"It will be more difficult than it was last year to find a common position on this issue," he added.

Steinmeier did not single out specific EU countries resisting continued sanctions, but Italy and Hungary have been among the most sceptical while Poland and the Baltic states have repeatedly pressed for maintaining pressure on Moscow.

Current EU sanctions on Russia's banking, defence and energy sectors expire in July. Extending them will require a unanimous vote, and EU leaders are expected to discuss the issue next month.

Steinmeier told BNS that Germany would "work hard to ensure that Europe presents a united front on this question", adding that penalties remain "inextricably linked" to the peace deal over eastern Ukraine.

The 2015 peace accords signed in the Belarussian capital Minsk call for a ceasefire along with a range of political, economic and social measures to end the conflict that has claimed more than 9,300 lives since April 2014.

Ties between Russia and the West have plunged to their lowest point since the Cold War over Moscow's 2014 annexation of the Crimean peninsula from Kiev and its support for separatist rebels in eastern Ukraine.

Spooked by Russia's actions, the eastern European states have lobbied the US-led alliance to increase its presence, and Lithuania’s defence ministry said last month that Germany "plans forming a NATO battalion group" in the country.

Steinmeier said NATO will discuss additional deployments at the July summit in Poland, without elaborating. He also said it was "good" that the NATO-Russia Council would meet ahead of the Warsaw summit.

"We need a dialogue with Russia in order to rebuild the trust that has been lost and to reduce the risk of being inadvertently drawn into a spiral of escalation," Steinmeier said.

"We need Russia in tackling the major international trouble spots – both in Syria and in our efforts to stabilise Libya.

"Particularly in times of crisis, we need formats that allow us to break our silence and to return to the negotiating table."

Over 1,700 detained at pro-Navalny rallies across Russia