PARIS - Palm oil produced on tropical plantations that drive deforestation has become a major biofuel for vehicles in the European Union, industry figures released Tuesday by an environmental group revealed. 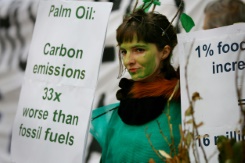 Second only to rapeseed as a biofuel, overall palm oil use in EU countries jumped six-fold from 2010 to 2015, according to data obtained by Brussels-based NGO Transport & Environment.

In 2014, nearly half of the palm oil used in Europe wound up in the gas tanks of cars and trucks, according to data compiled by the EU vegetable oil industry association Fediol, and obtained by Brussels-based NGO Transport & Environment.

Second only to rapeseed as a biofuel, overall palm oil use in EU countries jumped six-fold from 2010 to 2015, accounting for a 34 percent increase in biodiesel consumption during that period, the figures showed.

Palm oil is also found in food, animal feed and cosmetics, but use in these sectors has dropped in Europe, in part due to pressure from environmental groups on major corporations.

Up to now, how palm oil was distributed across products in the EU was not known.

"We now know why the industry is withholding these numbers," said Jos Dings, executive director of Transport & Environment.

"They show the ugly truth of Europe's biofuel policy, which drives tropical deforestation, increases transport emissions, and does nothing to help European farmers," he said in a statement.

Rules set in place in 2009 require that 10 percent of energy for transport in all EU countries comes from renewable sources by 2020.

In practice, that has meant biofuels, since electric-powered vehicles account for a negligible percentage of energy in the transport sector.

Recent research, however, has shown that the climate impact of so-called "first generation" biofuels -- mainly rapeseed, palm, sunflower and soy oil -- is in fact greater than for fossil fuels, once deforestation is taken into account.

Recognising that the continued use of these crops clash with goals for slashing greenhouse gas emissions, The EU last year imposed a cap -- seven percent -- on the biofuels produced from food crops.

They have also established sustainability criteria for such fuels, and encouraged the development of so-called "advanced" biofuels made from municipal waste, recycled cooking oil or agricultural waste.

Transport & Environment and other green groups have called for the removal of food-based biofuels from the EU's transport energy mix after 2020.

The Fediol figures showed that 3.5 billion litres of palm oil were burned as fuel in 2014, some 10 million litres per day.

Fediol director general Nathalie Lecocq confirmed the figures for EU biodiesel from palm oil, and that they had never been published.

The numbers were "rough estimates for internal working purposes," she said by email.

Lecocq also said that "only certified sustainable palm oil can be used to produce biodiesel."

"This ensures that today, European biofuels are the most sustainable biofuels in the world," she added.

Many NGOs question whether these standards are met in practice.

Deforestation from all sources is responsible for about 12% of the greenhouse gases that drive global warming.

Clear-cutting and burning to make way for palm oil plantations also cause health-wrecking pollution and destroy some of the planet’s richest "hotspots" for biodiversity.

US Fed expected to stand its ground despite rising inflation