Give me just a little more time | Bangkok Post: learning 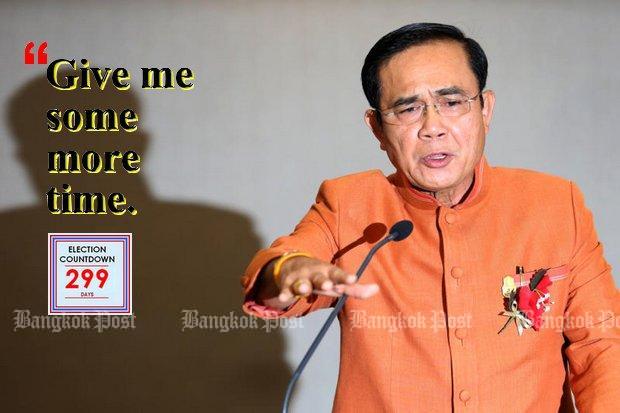 Prime Minister Prayut Chan-o-cha has appealed to the public to let him stay on in power to "continue laying the foundations for the country," even though he gave no indication of how long he intends to remain in charge.

Speaking to reporters after Tuesday's cabinet meeting, Gen Prayut said the government hopes to lay a firm foundation for the country's future prosperity but it is up to future administrations to decide how to carry the torch.

"Give me some more time to lay a solid foundation," he said. Exactly how much time that would be, he said, "depends on the law."

Despite indications that the national election will be postponed until February 2019, Gen Prayut insisted he would stick to the road map. In lieu of any legal problems, the election will take place "on time," he said.

He is understood to have meant that the election process will start after four poll-related laws have been enacted.

Gen Prayut previously announced the election would be held in November only for the National Legislative Assembly (NLA) to vote on Jan 25 to extend enforcement of an organic bill on MP elections by another 90 days. This would effectively delay the poll until February.

The move has led to widespread critism. However, the prime minister denies that he is failing to honour his promise, saying he had merely promised to improve people's lives and make them happier.

Some critics have pointed out the irony of his latest move, given that he famously composed a song titled "We Will Fulfil Promises."

"In some respects I can return happiness to the people straight away, but in other respects [they must wait]," he said.

"It also boils down to fixing problems and ... future governments."

He denied he was making any excuses.

"Is the country happier and more peaceful now? Has the economy improved? Have many problems been solved? Though it's not much...I've done what I can," he said.

Asked to comment on his government's declining popularity, he said they must find out which groups are unhappy and why. It was only natural for a government that has run a country for nearly four years to face problems, Gen Prayut said.

On Tuesday, Democrat Party leader Abhisit Vejjajiva said the delayed poll was not his chief concern. Rather, he was worried about the loss of confidence in the government.

The National Council for Peace and Order (NCPO) has failed to clearly explain why it has not yet lifted the ban on political activities. It should do so to give the public confidence and prevent groups from using this as a pretext to instigate unrest, he said.

Meanwhile, former Pheu Thai MP Samart Kaewmeechai slammed the prime minister, saying he has laid no solid foundations for the nation over the past four years.

"He should let the people decide the country's future," he said.

Click "play" to listen to Give me just a little more time and "Download" to keep this file for educational purpose.

carry the torch : to lead people in supporting an idea, especially in politics, often an idea begun by someone else -

enact : (of a parliament) to pass into law -

in lieu of : instead of - แทนที่

indication : a sign that something happened, is true or exists - เครื่องบ่งชี้

instigate : to cause an event or situation to happen by making a set of actions or a formal process begin - ก่อให้เกิด, กระตุ้น

irony (noun): he amusing or strange aspect of a situation that is very different from what you expect; a situation like this -

lift : to end a warning, a restriction, etc. - ยกเลิก

organic law : a basic law for governing a country, in this case, a law required by the constitution.  - กฎหมายประกอบรัฐธรรมนูญ, กฎหมายหลัก, กฎหมายลูก

postpone : to delay; to decide that something will be done at a later time - เลื่อนออกไป

pretext : a false reason that you give for doing something, usually something bad, in order to hide the real reason; an excuse - ข้ออ้าง, ข้อแก้ตัว

prosperity : the situation of being successful and having a lot of money - ความมั่งคั่ง