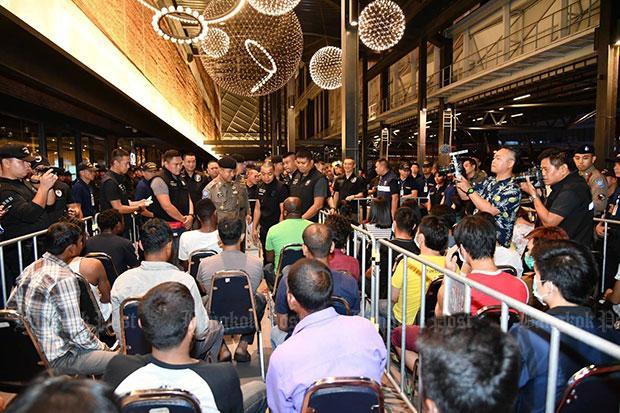 Some of the foreigners arrested during Friday morning's coordinated police raids on 337 premises in Bangkok and other provinces. (Photo: Tourist Police Bureau)

A total of 319 foreigners were arrested for immigration offences in the latest "outlaw tourists" raids, which targeted 337 locations across the country early on Friday morning.

Combined teams of local, immigration, tourist police and other agencies descended on premises in Bangkok, Kanchanaburi, Nakhon Sawan and other provinces, targeting people at one language school, two secondary schools and 334 other places frequented by foreigners.

Ninety-six of those arrested (65 from Myanmar, 13 from India, 7 from Laos, 4 from Vietnam, 2 each from Cambodia and Russia, one each from China, Ghana and Nigeria) were charged with overstaying their visas.

The longest overstayer was Francis Okai, 36, a Ghanaian man caught in Bangkok 656 days after he should have left, followed by Arjun Kumar Yadav, 30, an Indian national caught in Kanchanaburi for overstaying 162 days, and a Vietnamese woman, Nguen Thi Ngoc, 28, who was arrested in Nakhon Sawan 60 days after her visa expired, Pol Maj Gen Surachate said.

Another 131 (79 from Myanmar, 15 from Cambodia, 10 from Laos, 9 from China, 7 from Vietnam, 6 from India, one each from Malaysia, the Philippines, the USA, Ivory Coast, and another whose nationality was not released) were charged with illegal entry. The remaining 142 (50 Thais, 48 from Laos, 21 from Cambodia, 14 from Myanmar, 4 from China, one each from India, Vietnam, Canada, Israel and the US) were charged with other offences.

The raids were the 21st phase of operation X-Ray Outlaw Foreigner, which aims to sweep out foreign criminals entering the country to commit crime, such as romance scams, credit card skimming and drug trafficking, and those who overstay their visas, the acting Immigration Bureau chief said.

To date, a total of 2,273 people had been arrested during raids at 4,496 locations across the country. Authorities would continue the crackdown, impose stricter measures and search more locations in tourist provinces and border areas to boost overall safety for tourists, he said.

All the arrested foreigners would be put on police blacklists and deported to their home countries, Pol Maj Gen Surachate said.

Click "play" to listen to 319 foreigners arrested in latest 'outlaws' raids and "Download" to keep this file for educational purpose.

acting : doing the work of the usual person in a particular job while they are not there, or until a new person starts - ที่รักษาการแทน

blacklist : a list of the names of people, companies, products or countries that an organization or a government considers unacceptable and that must be avoided - บัญชีดำ, รายชื่อผู้ที่รัฐบาลไม่ยอมรับหรือต้องถูกหลีกเลี่ยง

briefing : a meeting in which people receive information or instruction - การสรุปแบบสั้นๆ

impose : to introduce something and force people to accept it - กำหนด,บังคับใช้

premises : the buildings and land that a business or organisation uses - ที่ดินและสิ่งปลูกสร้าง

raid (noun): a short (surprise) attack on an enemy or group - การจู่โจม,การโจมตี, การบุกเข้า

scam : a dishonest plan, especially for getting money - กลโกง, แผนร้าย

skim (verb): to use a piece of equipment to secretly obtain information from a electronic device like an ATM - ขโมยข้อมูลด้วยเครื่องดักข้อมูล

trafficking : dealing in illegal goods, like drugs, weapons or in illegally moving humans or animals from one place to another - การค้าสิ่งที่ผิดกฎหมาย