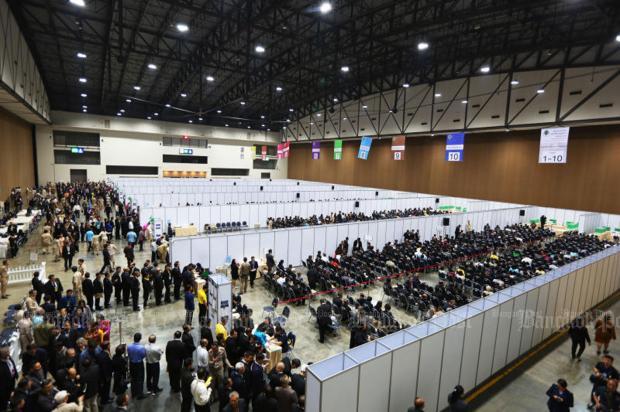 This 2018 photo shows the senator selection process at Impact Muang Thong Thani in Nonthaburi province. Over 2,700 candidates were shortlisted to 200 for the junta to handpick to 50.

At least 160 or two-thirds of the 250 newly appointed senators have military or police backgrounds, sparking criticism that the Upper House is a tool to extend the regime's rule, which critics say would renew political conflict.

The Royal Gazette on Tuesday published an announcement on the royally approved list of 250 senators, including 101 generals from both the army and the police force.

Under the current constitution, the 250 senators appointed by the National Council for Peace and Order (NCPO) will serve during a so-called five-year transitional period after the March 24 election.

During this period, the regime-appointed Senate will be allowed to join the House of Representatives to vote for a prime minister from prime ministerial candidate lists submitted by parties.

Former finance minister Thirachai Phuvanatnaranubala said the fact that the constitution allows senators to join MPs in voting for a prime minister is unusual and undemocratic.

"It is like an exchange of favours. The prospects for the country of finding a way out of problems are not so bright," Mr Thirachai said.

He added that the number of senators and MPs from the alliance led by the Palang Pracharath Party (PPRP) would be enough to keep Prime Minister Prayut Chan-o-cha in power.

However, with a marginal majority in the House, the new government will be plagued with instability and it is only a matter of time before problems erupt, Mr Thirachai said. The PPRP-led alliance is expected to garner 253 of 500 House seats to form a coalition government.

"As as result, the new government will have to draw 'cobra' MPs to join it. This means reforms have made no progress after five years of the regime being in power," Mr Thirachai said, adding the senators should vote for a prime minister independently of those who appointed them.

The term "cobra", or ngu hao in Thai, refers to renegade politicians who vote in favour of the opposing side.

Yutthaporn Isarachai, a political scientist from Sukhothai Thammathirat Open University, said the chances of the country finding a way out of its current problems seem limited now it has become clear who the appointed senators are.

Click "play" to listen to Senators seen as PM puppets and "Download" to keep this file for educational purpose.