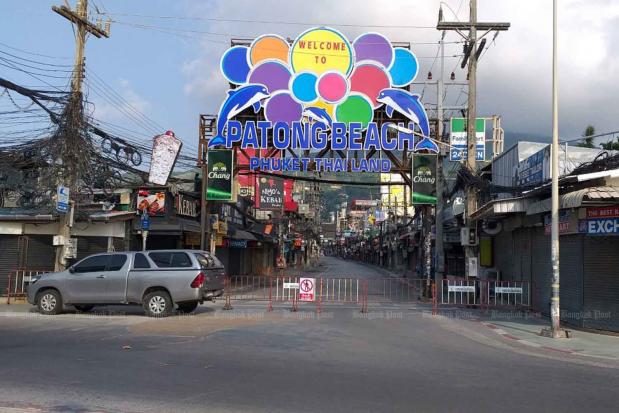 The tourist attraction is deserted in Phuket as the tourist island province is locked down to control Covid-19. (Photo: Achadtaya Chuenniran)

The Phuket governor has issued an order barring people and vehicles from leaving and entering the southern island province as it confirms six more Covid-19 infections, bringing the total to 53.

Governor Pakkapong Taweepat ordered the closure of all entry and exit points in the province, except for air travel, effective from midnight on Monday until April 30 or further notice.

Under the order, people and all kinds of vehicles are banned from entering and leaving the province via the Tha Chat Chai checkpoint, except those transporting food and essential items, fuel, construction materials, medical equipment, rescue operations vehicles, ambulances, vehicles for state operations, and vehicles carrying publications.

A ban is also imposed on people and all kinds of ships from entering and leaving the province through its international ports, except cargo ships.

People and all kinds of vessels are also prohibited from entering and leaving the province through inter-provincial waterways, except for ships carrying food and essential items, construction materials, medical equipment, rescue boats and medical emergency ships.

Those who are exempted must have medical certificates issued in the past three days, and must comply strictly with disease control measures.

The resort province of Phuket has confirmed six more Covid-19 infections, bringing the total to 53.

The six new cases, all linked to the Patong area, followed six new infections which were reported on Saturday. Of the 53 cases, 46 patients are still receiving treatment at hospitals, while seven have recovered.

The six new infections reported on Sunday include a Thai woman, 42, in Patong area. As the owner of a souvenir shop, she had been in close contact with many foreign tourists before falling ill on March 18.

Another case involves a 32-year-old Ukrainian who is a health business operator. She had close contact with workers at entertainment venues in Soi Bangla and foreign tourists. She travelled to Bangkok between March 20-23 and fell sick on March 24.

Click "play" to listen to Phuket lockdown until April 30 and "Download" to keep this file for educational purpose.

banned : officially not allowed to do something - ถูกห้าม

cargo : things that are being sent by ship, plane, train or truck - สินค้าที่บรรทุกและจัดส่งโดยเรือ เครื่องบินหรือรถไฟ

exempted : not having to follow a rule or obligation or make a payment - ยกเว้น

publication (noun): a book, a magazine, etc. that has been published - สิ่งตีพิมพ์

souvenir : something that you buy during a holiday or at a special event to remind you later of being there - ของที่ระลึก