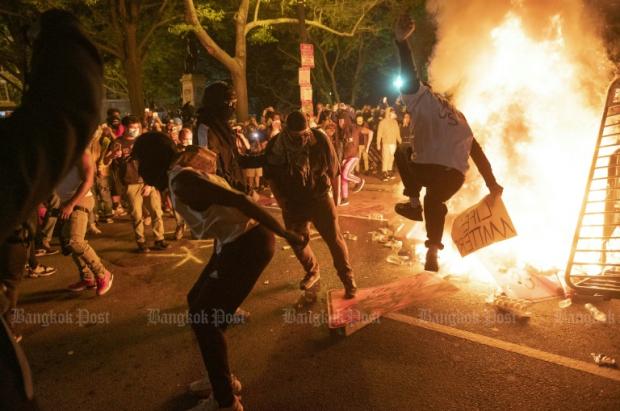 Protesters jump on a street sign near a burning barricade during a demonstration against the death of George Floyd near the White House on May 31, 2020.

MINNEAPOLIS - An autopsy found Monday that an African-American man whose death has set off nationwide unrest was suffocated by a police officer, as cities including New York imposed curfews in expectation of fresh anger.

Violence has erupted for three nights outside the White House, and one person was shot dead in Louisville, Kentucky, whose mayor fired the police chief.

One week after George Floyd died in Minneapolis, an autopsy blamed his videotaped death on white police officer Derek Chauvin who pinned him down with his knee for nearly nine minutes as Floyd pleaded, "I can't breathe!"

A memorial for Floyd will take place on Thursday in Minneapolis before a service in North Carolina and a funeral on June 9 in Houston, where he grew up, the family lawyer said.

Floyd, 46, had been accused of trying to buy cigarettes with a counterfeit bill and his aggressive arrest was caught on a cellphone camera.

The autopsy revived demands for the arrest of three other police officers who stood guard for Chauvin as Floyd pleaded for his life.

"We are tired of this happening. This generation is not having it. We are tired of oppression," said Muna Abdi, a 31-year-old African-American woman at a peaceful demonstration at the Minnesota capitol in St. Paul.

Pointing to her three-year-old son, she said: "I want to make sure he stays alive."

Officer Derek Chauvin, who had remained in the police force despite persistent complaints about his behaviour, had been due to appear in court on Monday but the judiciary said the initial hearing had been postponed to June 8.

New York became the latest city to impose a nighttime curfew after nights of tension that included looting and the trashing of parked cars.

New York, like other cities, had just been emerging from weeks under lockdown from the coronavirus pandemic.

More than 40 cities have imposed curfews.

It was the most widespread unrest in the United States since 1968, when cities went up in flames over the slaying of civil rights icon Martin Luther King Jr., and rekindled memories of 1992 riots in Los Angeles after police were acquitted in the brutal beating of black motorist Rodney King.

Joe Biden, President Donald Trump's likely Democratic opponent in November elections, met Monday with black leaders at a church in his home of Wilmington, Delaware and promised to form a police oversight commission in his first 100 days as president.

"Hate just hides. Doesn't go away. And when you have somebody in power who breathes oxygen into the hate under the rocks, it comes out from under the rocks," Biden said.

Click "play" to listen to Autopsy finds US cop suffocated black man and "Download" to keep this file for educational purpose.

acquittal : an official judgment in a court of law that someone is not guilty of the crime they were accused of - การตัดสินให้พ้นโทษ

counterfeit : illegal copies made in order to trick people - ของปลอม

flames : the brightly burning gases that you see coming from a fire - เปลวไฟ, เปลวเพลิง

memorial (adj.): of something that will continue to remind people of somebody/something after they die - ให้ระลึกถึ

plead : to ask for something in an emotional way - ขอร้อง, วิงวอน

suffocate (verb): to die because there is no air to breathe; to kill somebody by not letting them breathe air - หายใจไม่ออก, ทำให้หายใจไม่ออก

tension : the feeling caused by a lack of trust between people, groups or countries - ความตึงเครียด