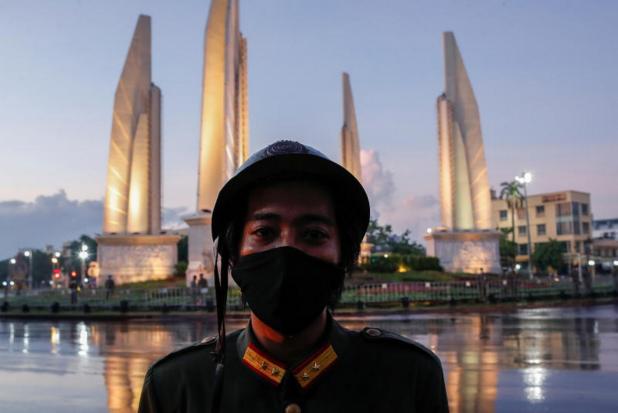 A protester dressed as a 1932 soldier takes part in a demonstration in front of the Democracy Monument in Bangkok on Wednesday, demanding changes to the constitution and marking the 88th anniversary of the 1932 revolt that ended the absolute monarchy in the country. (Photo: Reuters)

Political activists from several groups staged peaceful gatherings across the country on Wednesday to mark the anniversary of the 1932 revolt, which ended the absolute monarchy in what was then Siam.

In Bangkok, 30-40 demonstrators gathered at Democracy Monument and played a large-screen video re-enacting the speech made by People's Party leaders after they toppled the government of King Prajadhipok and ushered in Thailand's first government with a constitutional monarchy.

"Eighty-eight years ago today around dawn, the People's Party seized power and changed the system of governance to a democracy," said Anon Nampa. Another protest was planned outside parliament.

Activists demanded amendments to the current constitution written by the junta.

"We want to use the revolt anniversary to make our point about the problematic nature of the current constitution drafted by the military," said Anusorn Unno of the Committee Campaigning for a People's Constitution.

Police said they were monitoring protests in at least 12 provinces. Large public gatherings are banned during the coronavirus emergency, but authorities did not block the demonstrations.

In Khon Kaen, about 10 students from Khon Kaen University gathered to clean the area around the provincial Democracy Monument.

constitutional monarchy : a monarchy in which the ruler’s powers are defined and limited by a constitution - ระบบการปกครองที่มีพระมหากษัตริย์เป็นประมุข

demonstrators : people who march with other people in public to show that they support or oppose something - ผู้ชุมนุมประท้วง

drafting (noun): the process of writing a document that may be changed before it is in its final form - การร่าง

governance : the activity of governing a country or controlling a company or an organisation; the way in which a country is governed or a company or institution is controlled - วิธีการปกครอง

revolt : to take violent action against the people in power - ปฏิวัติ

revolution : a situation when people completely change their political system or government, often by force - การปฏิรูป

seize : to take control of a place or situation - เข้ายึดพื้นที่

speech (n): a formal talk delivered to an audience -

topple : to force out of power; to cause to fall (also oust, unseat or overthrow) - โค่นอำนาจ