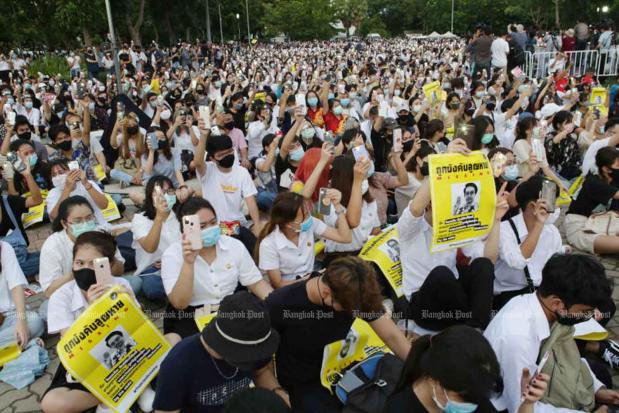 The authorities are looking to identify people who rallied for monarchy reforms at Thammasat University on Monday, according to Prime Minister Prayut Chan-o-cha.

Prayut said those who rallied at the university made comments that potentially violated Section 112 of the Criminal Code, adding the incident must be examined to determine who financed the demonstration and who was behind it.

Students have hit the streets in recent weeks, demanding the resignation of Gen Prayut's cabinet, the dissolution of parliament and the drafting of a new constitution. At the Monday rally, students expanded their demands to include reform of the monarchy.

Prayut also brushed off claims made on social media that police were sent in to arrest students, saying the posts "were hard to verify".

He urged protesting students to stick to the facts and be constructive when airing their opinions, adding they should not incite disorder.

The premier also shrugged off the views of 105 academics who lent support to the anti-government students, suggesting the 105 are minority voices in academic circles.

Police expressed concern over the anti-government rallies, which could now be deemed as offensive to the monarchy.

Police officers are to be deployed to beef up security during a planned rally on Sunday at the Democracy Monument.

Click "play" to listen to Prayut examines student protests and "Download" to keep this file for educational purpose.

academic : someone who teaches at a college, or who studies as part of their job - นักวิชาการ

behind (verb): the cause of - A bad upbringing is behind his becoming a criminal as an adult.

brushed off : refused to listen to someone, or to accept that something might be true or important - ไม่ยอมรับฟัง

circle : a group of people who are connected because they have the same interests, jobs, etc - หมู่คณะ

disorder : a situation in which people behave in a noisy or violent way in public, often as a protest against something - ความวุ่นวาย

draft : to write a document, plan, etc. that may be changed before it is finally accepted - ร่าง

finance : to provide money for something - จัดหาเงินทุนให้

incite : to encourage people to be violent or commit crimes by making them angry or excited - ยั่วยุ ยุยงให้เกิดความรุนแรง

minority : involving less than half of a group - เสียงส่วนน้อย

monarchy : a type of government in which a country is ruled by a king or queen - การปกครองที่มีพระมหากษัตริย์เป็นประมุข

offensive : causing someone to become upset or angry; rude - ซึ่งทำให้ไม่พอใจ,น่ารังเกียจ

shrug off : to show that something does not worry or upset you - ไม่เอาใจใส่, ไม่สนใจ