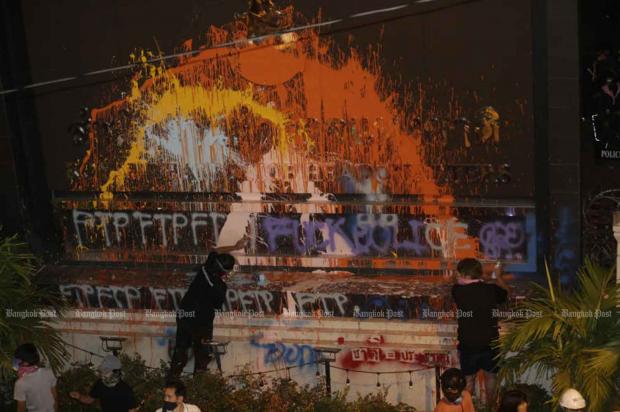 The Royal Thai Police headquarters name plate is splashed with paint and defaced before the protest dispersed on Wednesday evening. (Photo by Pornprom Satrabhaya)

Parliament's rejection of the people's constitution amendment draft has left anti-government protesters with no other choice but to continue their street protests, Jatupat "Pai Dao Din" Boonpattarasaksa, a protest leader, vowed on Wednesday.

He was speaking after the draft, sponsored by rights group Internet Dialogue on Law Reform (iLaw) and supported by more than 100,000 people, was rejected at the end of the first reading.

Only two drafts were passed on Wednesday at the end of the two-day parliamentary session held to look at seven drafts, including the iLaw measure. The drafts which were approved were proposed by the coalition parties and the opposition parties respectively.

Mr Jatupat said Wednesday's decision by parliament was the last chance at compromise.


Free Youth, a key element in the anti-government movement, posted on its Facebook page accusations of most MPs and senators serving the "dictator" and ignoring calls by the people.

The group also accused parliament of barring attempts to amend parts of the constitution which deal with the King. This suggests any new constitution would not really serve the people, said the group.

Protest co-leader Arnon Nampa told protesters not to splash paint at the portrait of Her Majesty Queen Sirikit The Queen Mother installed at the Royal Thai Police Headquarters. He said the target of the protesters was the police force and the protesters should not move away from that target as they would be walking into a trap set by the police.


Thousands of protesters began gathering at the Ratchaprasong area in downtown Bangkok late Wednesday before moving on to the national police headquarters nearby. Police increased security at the palace and King Chulalongkorn Memorial Hospital nearby, deploying six companies of riot-control officers. Some protesters splashed paint onto the Royal Thai Police sign and sprayed paint on the road, while others began a barbeque at the protest site, said a source.


Demonstrators on Wednesday ended their rally at Ratchaprasong intersection at 8.20pm and announced they will hold another rally at the Crown Property Bureau on Nov 25.

amend : to make changes to a document, law, agreement, etc. especially in order to improve it - การแก้ไขกฎหมาย

coalition : a temporary union of different political parties that agree to form a government together  - พรรคร่วมรัฐบาล

compromise : a way of solving a problem or ending an argument in which both people or groups accept that they cannot have everything they want - ประนีประนอม

dictator : someone who uses force to take and keep power in a country - จอมเผด็จการ

draft : something, e.g., a written proposal for changes to the constitution, a law, etc. that may be changed before it is finished - ร่างกฎหมาย

headquarters : the place where an organisation or company has its main offices - กองบัญชาการ

parliamentary (adj): connected with a parliament, a law-making body - เกี่ยวกับรัฐสภา

riot control police (noun): police who are trained to deal with violent groups of people - ตำรวจปราบจราจล

slam : to strongly criticise someone or something - วิพากษ์วิจารณ์อย่างรุนแรง

trap : a dangerous or unpleasant situation from which it is difficult or impossible to escape - ถูกกับดัก