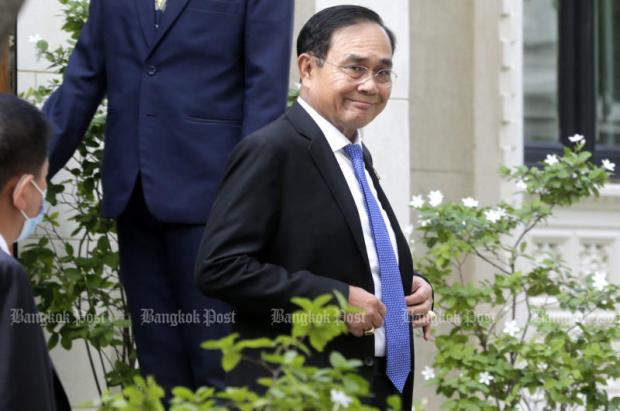 Prime Minister Prayut Chan-o-cha smiles to reporters as he leaves a meeting on Covid-19 at Government House on Wednesday. (Photo: Pornprom Satrabhaya)

Prime Minister Prayut Chan-o-cha has been cleared of any wrongdoing in staying in army housing while being the prime minister.

His occupancy was allowed under a 2005 army regulation, which lets army chiefs continue to stay on base after they retire if they continue to serve the country well, according to the ruling read out at the court in Bangkok on Wednesday afternoon.

The Constitutional Court said the regulation had come into effect before Gen Prayut was the army chief, and other former army commanders also receive the same benefits.

The court said the army regulation allowed its former commanders to use such houses, and to subsidised utility bills.


The free utilities also do not constitute a conflict of interest since they are part of the welfare that comes with the housing.

For these reasons, the court ruled the premiership of Gen Prayut does not terminate and he did not seriously violate the code of ethics.

Click "play" to listen to Prayut cleared in army housing case and "Download" to keep this file for educational purpose.

clear : to prove that somebody is innocent, i.e., that someone is not guilty of what they have been accused of - พิสูจน์ว่าไม่มีความผิด

conflict of interest : a situation in which someone cannot make a fair decision because they will be affected by the results - ผลประโยชน์ทับซ้อน

Constitutional Court (noun): the court that decides whether or not laws follow the constitution - ศาลรัฐธรรมนูญ

occupancy (noun): the use, or the period of use, of a place, a space, etc. - การพำนักอาศัย

regulation : an official rule that controls the way that things are done - กฎระเบียบ

subsidised : paid part of the cost of something - ให้ความช่วยเหลือด้านการเงิน

terminate : to end or stop something - ทำให้สิ้นสุด