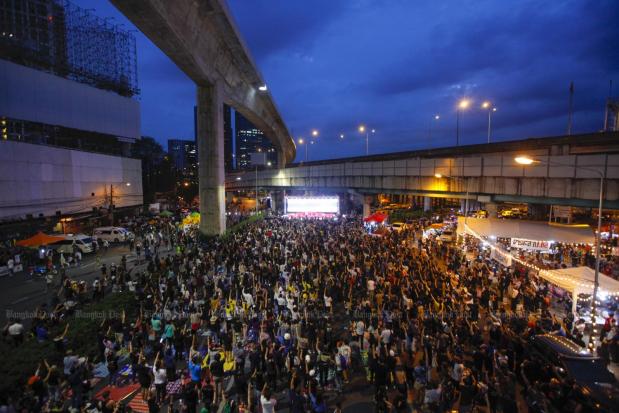 Prime Minister Prayut Chan-o-cha smiles amid supporters who take a group photo with him during his visit to Samut Songkhram on Wednesday. Photo by WICHAN CHAROENKIATPAKUL

The Constitutional Court's vote to clear Prime Minister Prayut Chan-o-cha of a conflict of interest in staying in an army house after his retirement has sparked outrage among anti-government protesters.

The protesters, who returned to Lat Phrao intersection in a mass gathering on Wednesday to hear the ruling, have threatened to intensify their rallies.

Somyot Prueksakasemsuk, leader of the June 24 Democracy Group, spoke to the crowd, saying nothing was illegal from now on. He added the ruling was not a surprise.

"The people will stop Prayut. It won't be long until he is out of office. People will rise up and end this vicious cycle that keeps Prayut in power," Mr Somyot said.

Arnon Nampa, another protest co-leader, told the crowd that calls will be made to reform the judiciary.

"Next year, the protests will grow in intensity even more," he told the rally.

Panupong "Mike" Jadnok, a Ratsadon anti-government leader, also spoke to the protesters, saying the protests would continue with even more energy.


On Wednesday, all nine Constitutional Court judges found Gen Prayut not guilty for staying in an army residence while in his role as prime minister.

His occupancy was allowed under a 2005 army regulation, which lets army chiefs stay on base after they retire if they continue to serve the country well.

Click "play" to listen to Prayut ruling angers students and "Download" to keep this file for educational purpose.

base : a place where an army, a navy, etc. operates from - ฐานทัพ, ฐานที่มั่น

Constitutional Court (noun): the court that decides whether or not laws follow the constitution - ศาลรัฐธรรมนูญ

energy : the physical and mental effort that you use to do something - กำลัง, พละกำลัง

judge : someone whose job is to make decisions in a court of law - ตุลาการ, ผู้พิพากษา

judiciary : the part of a country's government which is responsible for its legal system and which consists of all the judges in the country's courts of law - คณะตุลาการ, คณะผู้พิพากษา

occupancy (noun): the use, or the period of use, of a place, a space, etc. - การพำนักอาศัย

ruling  (noun): a judgement; a decision by a court of law - คำตัดสิน คำชี้ขาด

threaten : to say you might or will do something bad or harmful, especially in order to make someone do something - ขู่