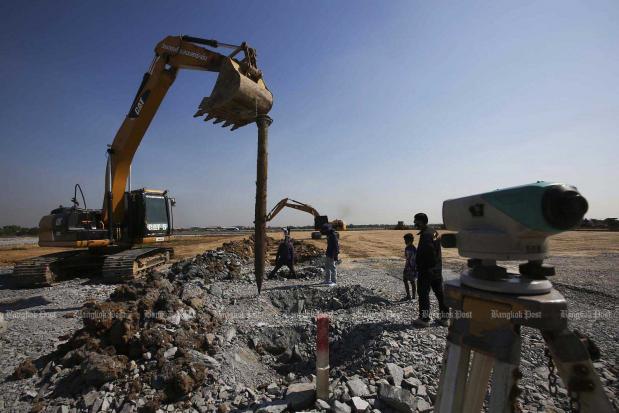 People operate heavy machinery to clear and drill during the construction of a field hospital at the 100-rai Watthana Factory project site in Samut Sakhon.

However, there would be no punishments for those who do not download it, so long as they inform officials of their travel plans when crossing provincial borders.

His remark came on Thursday afternoon after an announcement made by Taweesilp Visanuyothin, the Centre for Covid-19 Situation Administration (CCSA) spokesman. He said use of the app would be mandatory in the declared maximum-control zones, a statement that was strongly opposed by some critics and sparked uproar online.

Many said that there are many Thais who still don't have a smartphone and would be unable to download the app.

The CCSA spokesman earlier told a daily press briefing on the Covid-19 situation that people would have to install the Mor Chana app onto their mobile phones and use it together with Thai Chana, an app used for checking into and out of public places.

Deputy Prime Minister and Public Health Minister Anutin Charnvirakul later on Thursday responded to growing public frustrations over the Mor Chana app rule. He said in a Facebook post he had already convinced the PM that the rule would be a burden to many people.

"The PM has agreed with my explanation and will amend the order (requiring all people to have the Mor Chana app on their smartphones) and allow the use of paper-based [Covid-19 contact-tracing] instead," said Mr Anutin.

A government spokesman said anyone who feels uncomfortable with using the Mor Chana app may instead record his or her travel history and submit his or her travel itinerary at a Covid-19 checkpoint when travelling.

burden : a serious or difficult responsibility that you have to deal with - ภาระ

frustration : an annoyed or discouraged feeling because you cannot do or have what you want - ความผิดหวัง, ความไม่พอใจ

itinerary : a plan of a journey that you are going to make, including information about when and where you will travel - แผนการการเดินทาง

provincial (adj): related to "provinces" , the different parts of a country - ประจำจังหวัด, ส่วนท้องถิ่น

punishment : an act or a way of punishing somebody - การลงโทษ

trace : to discover the cause or origin of something by examining the way in which it has developed - สืบหาร่องรอย

U-turn (noun): a complete change in policy or behaviour, usually one that is embarrassing; a turn of 180° that a vehicle makes so that it can move forwards in the opposite direction - การเปลี่ยนโดยสิ้นเชิง, การเลี้ยวหรือทางเลี้ยวเป็นรูปตัว "U"