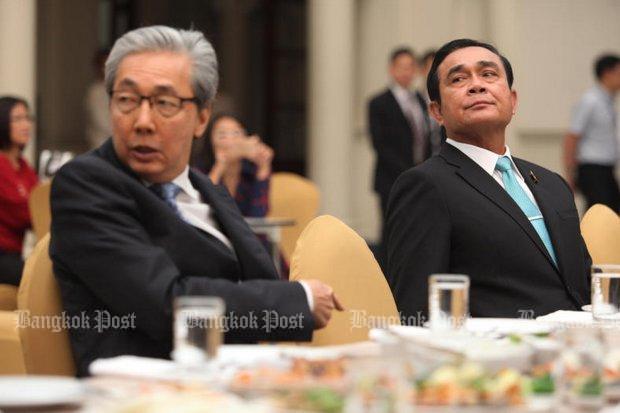 Deputy Prime Minister Somkid Jatusripitak with Prime Minister Prayut Chan-o-cha Monday. Mr Somkid had a tense visit to the Ministry of Science and Technology on Monday.

Deputy Prime Minister Somkid Jatusripitak blasted the Ministry of Science and Technology Monday for failing to promote the study of science among children.

"We have talked about plans to encourage young Thais [to study science] for three years and the ministry has still not woken up to that reality," Mr Somkid said during his visit to the ministry to discuss the government's vision for science and technology.

"I understand the difficulty, but the ministry has to provide solid frameworks and infrastructure to move forward," said Mr Somkid, who has championed science and innovation to drive the economy forward.

He also urged the ministry to cooperate more with the private sector.

"The private sector has done an incredible job in terms of technology. [China's] Alibaba and Tencent created an ecosystem that incorporates the role of government, and we should consider such opportunities for public-and-private partnerships for Thailand," Mr Somkid said.

"Around 70% of students study social sciences and only 30% study natural sciences or technology. Really, those numbers should be reversed," Mr Suvit said.

He added the ministry has been trying to promote a love of science by setting up 24 science and technology centres nationwide. More will be opened in the years to come, including observatories to promote astronomy and physics.

The ministry also showcased its achievements from last year. These include its Startup Thailand event, which brought together over 2,000 start-ups across Thailand, and the Eastern Economic Corridor of Innovation, a research agency which promotes innovation in high-tech industrial estates.

"Our long-term goal is to elevate Thailand to become a country that lives off innovation. Core technology is our area of emphasis, and we will build 5,000 innovation-driven enterprises and start-ups," Mr Suvit said.

The ministry is also moving forward with its Futurium project, a 51-rai plot of land owned by the National Science Museum which will be used as a learning centre for science and technology. It is hoped that this will help spark innovation, boost careers and develop skills.

"In five to 35 years' time, we hope to be a global leader in at least one aspect of technology," Mr Suvit said.

champion : to publicly support a set of beliefs, political aims, or a group of people - สนับสนุน

core : the most important or most basic part of something - ที่สำคัญที่สุด

ecosystem (noun): all the different activities, companies, systems etc that are involved in a particular area of business, especially new technology - ระบบนิเวศ

elevate (verb): to lift something up or put something in a higher position - ยกระดับขึ้น, เลื่อนขึ้น

emphasis : special importance or attention that is given to one thing in particular - การเน้นย้ำ

framework : a system of rules, ideas or beliefs that is used to plan or decide something - ขอบข่ายงาน, โครงร่าง

infrastructure : the set of systems within a place or organisation that affect how well it operates, for example the transport and communication systems in a country - ระบบสาํธารนูปโภค

observatory : a special building/satellite from which scientists watch the stars, the weather, etc. - หอสังเกตการณ์

priority : something important that must be done first or which needs more attention than something else - การมาก่อน

spark : to make something happen - ก่อให้เกิด