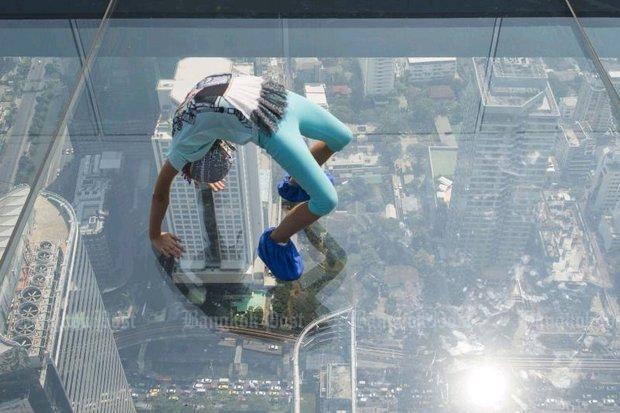 A gymnastic visitor contemplates polluted Bangkok on Monday from the 78th floor of the see-through glass observation deck atop the King Power Mahanakhon skyscraper. (AFP photo)

The Pollution Control Department (PCD) has debunked claims by academics that some of the PM2.5 pollutants that have shrouded Bangkok and its vicinity over the past few weeks have come from Cambodia, saying winds blow fine dust particles from the neighbouring country towards the Gulf of Thailand.

The claim was made last week by Siwat Phongpiachan, head of the Centre for Research and Development of Disaster Prevention and Management at the National Institute of Development Administration (Nida) and Professor Serm Janchai, a physics lecturer at Silpakorn University's Faculty of Science.

The academics also urged more research into and cooperation on trans-boundary pollution within Asean.

In response to the claim, PCD director-general Pralong Damronthai said his agency is actively tracking "hot spots" where slash-and-burn farming is practiced -- both inside and outside of Thailand -- which are known contributors of ultra-fine, PM2.5 pollutants.

Mr Pralong said that based on a mathematical model for weather analysis developed by the United States' Environmental Protection Agency, winds blow fine dust particles from Cambodia towards Trat and the Gulf of Thailand.

Based on a Jan 20 model, there were 895 hot spots in Cambodia and it was found the fine dust particles moved from there to Trat and the Gulf. "The haze did not 'move' to the capital," he said. "The particles that caused the haze in Bangkok come from local sources."

The PCD's finding is consistent with data from the Asean Specialised Metrological Centre, which found the same thing, Mr Pralong said.

As concern over the PM2.5 hazard increases, the governors of the five provinces that border the capital have placed indefinite bans on outdoor trash burning. "We have also instructed authorities in Nakhon Sawan, Phichit, Kamphaeng Phet, Uthai Thani, Chai Nat and Sa Kaeo to seek cooperation from the public," said Mr Pralong.

The PCD reported that the volume of PM 2.5 on Monday continued to exceed the safety limit of 50 microgrammes per cubic metre (µg/m³) in 10 areas across the capital, as well as Samut Prakan's Phra Pradaeng district and Nakhon Pathom's Muang district.

Deputy Bangkok governor Thaweesak Lertprapan said the haze may cause an increase of influenza among young children and the elderly across affected areas.

Click "play" to listen to Haze caused by 'local sources', says PCD and "Download" to keep this file for educational purpose.

analysis : the detailed study or examination of something in order to understand more about it; the result of the study - การวิเคราะห์

boundary : a real or imagined line that marks the edge or limit of something - เขตแดน,เส้นแบ่งเขต

consistent with : containing statements or ideas that are similar or that have the same aim - สอดคล้อง

contributor (noun): something that helps cause something, that "contributes" towards something happening - ซึ่งช่วยเหลือ, ซึ่งสนับสนุน

diesel (n): a heavy oil used as fuel in engines -

fine : made up of very small pieces - ละเอียด

haze : water, smoke or dust in the air that makes it difficult to see clearly - หมอกควัน

indefinite (adj): of a period of time with no fixed end - ไม่มีข้อกำหนด

slash-and-burn : involving the cutting and burning of forests or woodlands to create fields - ไร่เลื่อนลอย