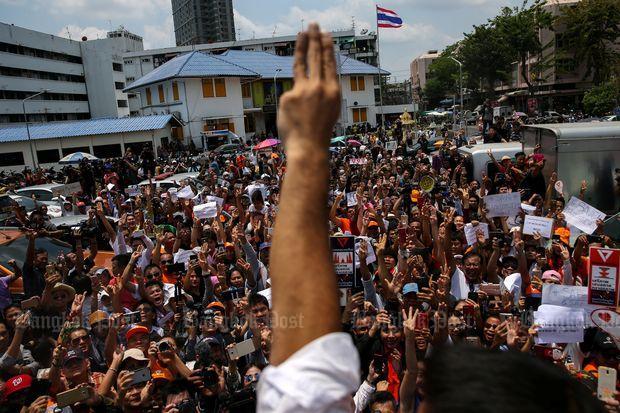 Thanathorn Juangroongruangkit, leader of the Future Forward Party, and his supporters a flash three-finger salute as he leaves a police station after hearing a sedition complaint filed by the army in Bangkok on April 6. (Reuters photo)

In a statement on Tuesday, the EC said after collecting evidence, it found Mr Thanathorn owned 675,000 shares in V-Luck Media Co Ltd. The MP law bans MPs from holding shares in media companies.

Mr Thanathorn owned V-Luck Media Co Ltd, publisher of the now-defunct WHO! people and lifestyle magazine. He said he had sold the shares on March 8 last year to his mother before applying to be MP and showed evidence of the transactions on his Facebook. However, some media outlets questioned whether the share sale took place after the March 24 poll, leading to the EC's investigation.

Deputy EC secretary-general Sawang Boonmee declined to say whether the former auto-parts tycoon would be banned from politics or his party would be dissolved, saying the decision rests with the EC commissioners.

The EC executive dismissed news reports the chairman of a subcomittee investing the case had quit because he was pressured to issue the orange card to ban Mr Thanathorn from politics.

Click "play" to listen to Thanathorn accused of breaching MP rules and "Download" to keep this file for educational purpose.

defunct : no longer existing, operating or being used - ถูกยุบ, หยุดทำงาน

share : any of the units of equal value into which a company is divided and sold to raise money. People who own shares receive part of the company's profits - หุ้น

transaction : the action or process of buying or selling something - การค้า

tycoon : a person who has succeeded in business or industry and has become very rich and powerful - นักธุรกิจที่ร่ำรวยและมีอิทธิพลมาก