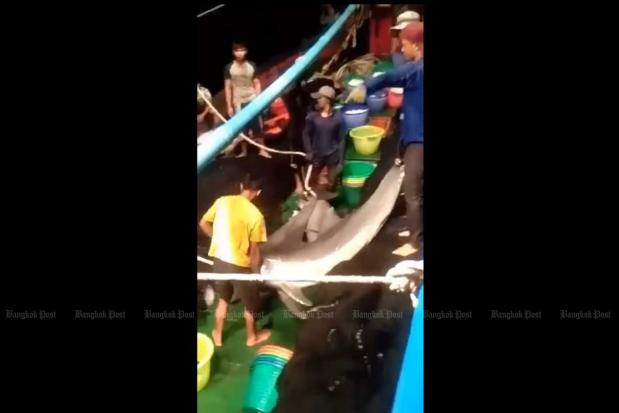 A screenshot from a video clip shows a dolphin being loaded onto a fishing boat after being trapped in a net set for long-tail tuna.

An online video showing many dolphins caught in a net set by fishermen for tuna has upset netizens, a marine scientist and the incoming natural resources and environment minister.

The five-minute-long clip posted online by popular news anchor Anuwat Fuangthongdeng included the voice of a Thai-speaking man ordering his crew to lift some dolphins out of the sea and load them onto their boat.

Marine scientist Thon Thamrongnawasawat also shared the clip and wrote that it broke his heart to see a pod of dolphins caught in a net set for long-tail tuna.

Minister Varawut Silpa-archa, who will be sworn in on Tuesday, said he had seen the video clip, which showed fishermen hauling about 10 dolphins trapped in a fishing net, loading them on their fishing boat and then releasing them into the sea.

The dolphins may have been trapped when they followed the boat and tried to eat tuna caught in the net, he said.

Officials should take action against those responsible and try to raise conservation awareness, he said.

Social media posters strongly condemned the fishermen for allowing the dolphins to be caught in their net.

Tup Meesupwatana wrote that under international practice fishermen had to open their net to free trapped dolphins. Duangruethai Reokarn wrote her heart was crushed by the picture of the motionless dolphins. Cherry Bun wrote that laws could do nothing about such an incident. Sureerat Thongsamrikthi commented there was no kindness shown.

The Fisheries Department said the video showed the fishing boat Sor Pornthep Nawee 9. The Thai owner had sold the boat to a Malaysian in June 2017. It left Thailand's southern province of Pattani and was re-registered in Malaysia. The boat now operated in Malaysian waters, the department reported.

Click "play" to listen to Video shows dolphins caught in fishermen's net and "Download" to keep this file for educational purpose.

anchor : a man or woman who presents a television or radio programme, especially the news - ผู้ประกาศข่าว

crew (noun): a group of people who work together to do a job - กลุ่มคนที่ทำงานร่วมกัน

dolphin : a large sea animal, similar to a fish, with a long nose - ปลาโลมา

kindness : being nice to people - ความเมตตา,ความกรุณา

pod : a small group of sea animals, such as dolphins or whales, swimming together - ฝูงสัตว์น้ำ (ที่เลี้ยงลูกด้วยนม)

practice : a way of doing something - การปฏิบัติ

sworn in : when someone gives a formal promise at an official ceremony, especially at the beginning of an important job - สาบานตนเข้ารับตำแหน่ง, กล่าวคำปฏิญาณเพื่อรับตำแหน่งหน้าที่

trapped  : to be unable to leave a place - ถูกกับดัก