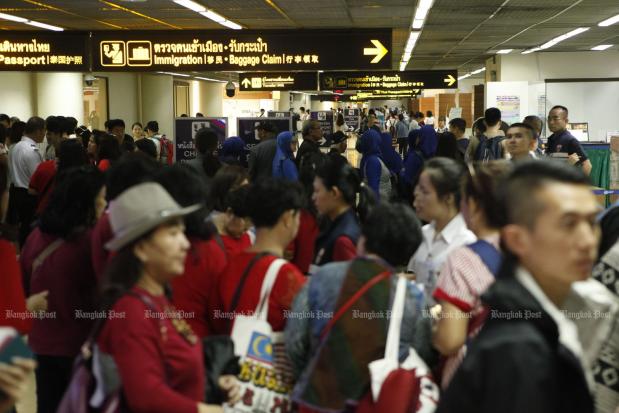 The Airports Department has proposed building a new airport in Nakhon Pathom province west of Bangkok to relieve congestion at Suvarnabhumi and Don Mueang.

The proposal will be forwarded to the Transport Ministry for its consideration, he said on Saturday. If approved, construction could begin in 2023.

Suvarnabhumi is now bursting at the seams, handling 70 million passengers a year at a facility designed for 40 million. A revised plan to build a 42-billion-baht second terminal was recently shelved as authorities said it deviated too much from the original master plan. Discussions are under way on a new approach.

If the Nakhon Pathom airport goes ahead and all phases are completed, it will be able to handle up to 25 million passengers a year.

Mr Jarun said the new airport had high potential thanks to its location less than 50 kilometres from downtown Bangkok and access to the Bang Yai-Kanchanaburi motorway.

Click "play" to listen to Third Bangkok airport proposed and "Download" to keep this file for educational purpose.

bursting at the seams (idiom): to be full or have a very large number of things (eg people) inside -

deviate (verb): to be different from something; to do something in a different way from what is usual or expected - ซึ่งเบี่ยงเบน, ซึ่งออกนอกเส้นทาง

facility : a building used for a particular purpose - สิ่งก่อสร้าง

potential : qualities that exist and can be developed - ศักยภาพที่จะพัฒนาได้

shelve : to decide not to use something such as a plan or suggestion now, although you may use it later - เลื่อนไปก่อน