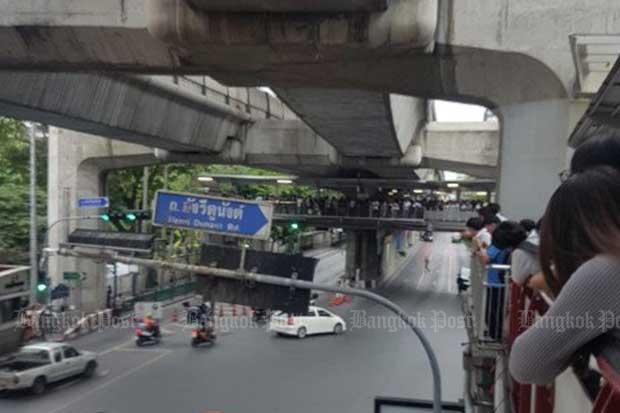 Police temporarily closed the inbound section of Rama I Road outside their headquarters on Thursday after a security camera captured a man dropping a suspicious object at the fence.

CCTV captures a man dropping a suspicious object outside the police headquarters on Rama I Road. https://t.co/U91Z7TlRJb

Traffic police radio reported the closure of the section of Rama I Road near the Royal Thai Police head office to check a suspicious object at around 5.30pm.

Bomb disposal officers were called into the area to handle the situation as the roadblock caused traffic congestion on other roads, it said.

The roadblock ended an hour later after police confirmed that the object was not a bomb, it added.

Click "play" to listen to Bomb scare briefly closes Bangkok road and "Download" to keep this file for educational purpose.

disposal : getting rid of something or, in this case, making an explosive safe   - การกำจัด

object : a thing that can be seen or touched, but is not alive - วัตถุ, สิ่งของ

roadblock : a temporary structure put across a road to stop traffic - สิ่งกีดขวาง

scare : a situation that makes people suddenly feel worried or frightened about something - ความหวาดกลัว, ความตื่นตระหนก