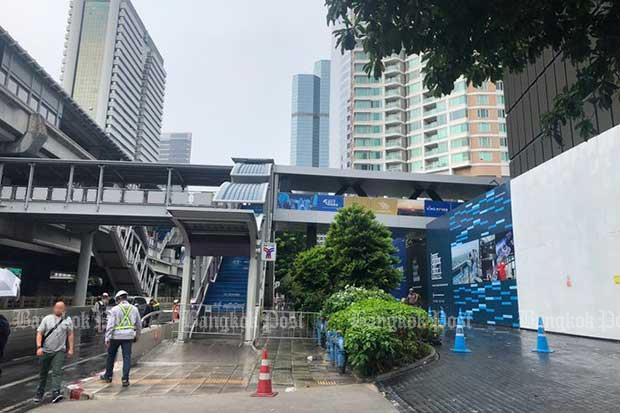 Police close the area near the BTS Chong Nonsi station after two loud bangs were heard there on Friday. (Photo from @js100radio Twitter account)

Loud bangs were heard near a skytrain station and at least three other areas in Bangkok on Friday morning, with two people confirmed injured on Rama 9 Road.

Police reported a loud sound similar to bomb explosions twice at the Chong Nonsi BTS station about 8.50am and closed exits 3 and 4 for safety reasons.

Police outside King Power Mahanakhon building near Chong Nonsi station of @BTS_SkyTrain where one loud bang was reported. https://t.co/G7sxux5es4

Police also cordoned off the ground near the two exits to examine the cause of the bang.

Twitter message showed a sheet of glass on the station platform was shattered.

Police also reported loud bangs in Soi 57/1 on Rama 9 road, injuring two city road cleaners at 8.50am, one loud bang outside King Power Mahanakhon Building near the same BTS station at 9am and three bangs near the Government Complex on Chaeng Wattana Road at the same time.

Explosive Ordnance disposal police are at the scene.

Click "play" to listen to Loud bangs at BTS station, other areas in Bangkok and "Download" to keep this file for educational purpose.