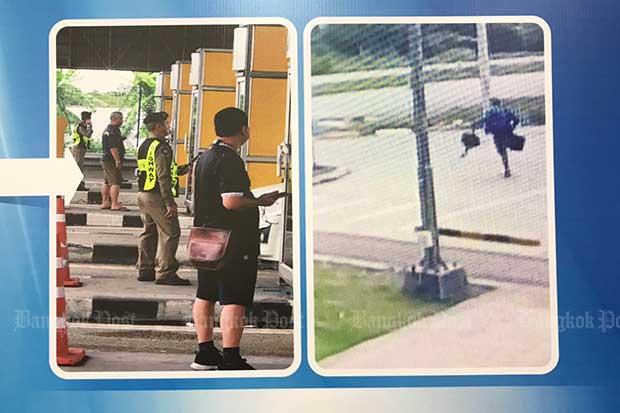 Police release photos showing the hunt for one of the four foreigners in connection with an abduction case involving an Indonesian victim. (Immigration Bureau photo)

Four unnamed foreign criminal suspects — three Indonesian nationals and one Vietnamese national — have been detained in Bangkok in connection with an abduction case involving an Indonesian victim, the Immigration Bureau said on Thursday.

A video clip received by the abducted man's family showed the abductors cutting off his finger and making a demand for a ransom of over 300,000 baht, said Atchayon Kraithong, chief of the bureau’s Division 3.

The abduction case has come as a shock to those in Indonesia, said Pol Maj Gen Atchayon.

On Sunday, the suspects had entered Thailand at an immigration checkpoint in Sa Kaeo province, which prompted a car chase from Sa Kaeo to Bangkok, he said.

The suspects were aware they were being chased and they managed to switch to a different public van to avoid being caught at a special checkpoint set up to stop them, he added.

The authorities later located the suspects at a hotel in the downtown Pratunam area of Bangkok, he said.

The four were later handed over to the Cambodian police.

Click "play" to listen to Four foreign criminals caught in Pratunam and "Download" to keep this file for educational purpose.

abduct : to take somebody away illegally, especially using force - ลักพาตัว

prompt : to cause something to happen or be done - ก่อให้เกิด

ransom : the amount of money that someone wants to be paid before they will let a person go or give back a valuable object - เงินค่าไถ่