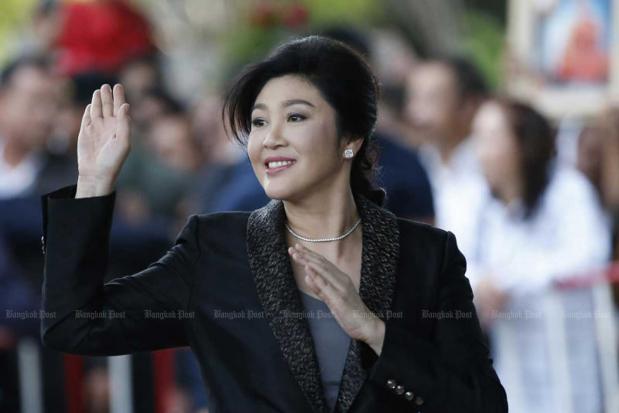 Yingluck Shinawatra waves to supporters as she arrives at the Supreme Court in Bangkok in 2017. (AP file photo)

The state news agency Tanjug reported Thursday that the Serbian government granted her the citizenship "because it could be in the interest of Serbia". Serbian officials did not comment on the reason behind the decision.

With the Serbian passport, she can travel without a visa to over 100 countries, including most members of the European Union.

Yingluck fled Thailand in 2017 days before she was convicted of running a rice subsidy scheme that was riddled with corruption and cost taxpayers hundreds of billions of dollars. She and her supporters say the case was politically motivated.

Her current whereabouts are unknown.

Both Thaksin and Yingluck headed elected governments that were toppled in military coups — Thaksin in 2006 and Yingluck in 2014. Thaksin has citizenship of another Balkan country, Montenegro, which he received in 2009.

Click "play" to listen to Yingluck gets Serbian citizenship and "Download" to keep this file for educational purpose.

citizenship : being a member of a particular country and having rights because of it - ชนชาติ, ความเป็นพลเมือง

convicted : having been proven guilty of a crime by a court of law - ต้องโทษ, ได้รับการพิสูจน์ว่าข้อกล่าวหามีความผิดจริง

exile : a situation in which you live in a foreign country because you feel you cannot live in your own country, usually for political reasons - การลี้ภัย การถูกขับออกนอกประเทศ

interest : an advantage or benefit to someone or something - ผลประโยชน์

riddled with : full of (something bad) - เต็มไปด้วย