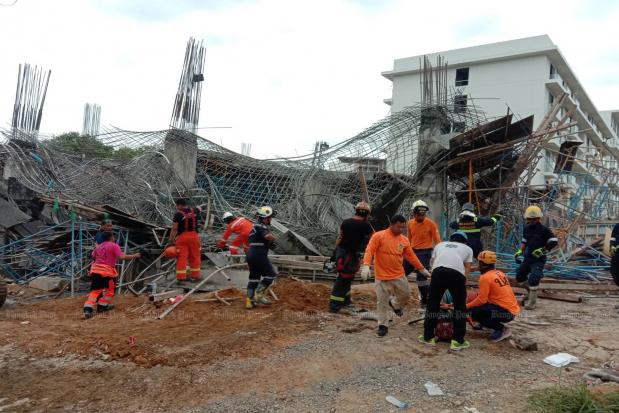 PHUKET: One person was killed and at least eight others injured when the scaffolding of a condominium project crumbled to the ground on Sunday.

Police at the Chalong station reported the collapse of the scaffolding at the construction site in tambon Rawai in Muang district at 2.15pm.

Police said the workers were Myanmar nationals. One of them died and eight were injured, with the casualties sent to Vachira Phuket Hosital, Dibuk Hospital and Chalong Hospital.

The police said two workers are trapped under the debris.

The scaffolding collapsed at the construction site of the VIP Rawai Condominium project.

An initial investigation found the scaffolding may not have been able to bear the increased weight after workers poured cement on the steel structure.

cement : a grey powder made by burning clay and lime that sets hard when it is mixed with water. Cement is used in building to stick bricks together and to make very hard surfaces - ปูนซีเมนต์

debris : broken pieces that are left when something large has been destroyed - เศษ ซากปรักหักพัง  ซากสิ่งของที่ถูกทำลาย

scaffolding : a structure of metal poles and wooden boards put against a building for workers to stand on when they want to reach the higher parts of the building - นั่งร้าน

steel (noun): a strong hard metal that is made of a mixture of iron and carbon - เหล็ก

structure : something large such as a building or a bridge that is built from different parts - โครงสร้าง