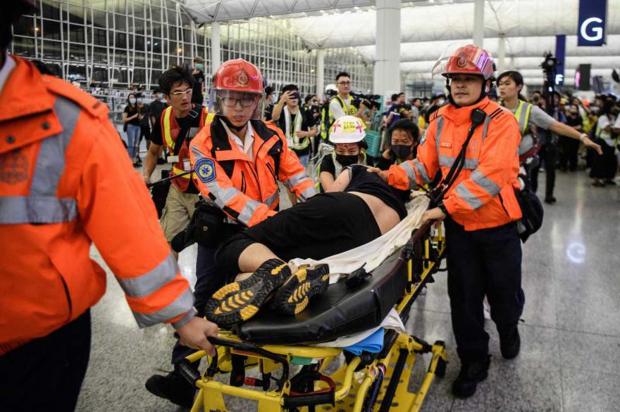 An injured man who was suspected by protestors of being a Chinese spy is taken away by paramedics at Hong Kong’s international airport early on Wednesday. (AFP photo)

Flights were departing Hong Kong airport largely on schedule on Wednesday morning, a day after pro-democracy protesters caused chaos with a disruptive sit-in that paralysed the busy transport hub.

Hundreds of flights were cancelled on Tuesday after demonstrators blockaded two terminals, the second consecutive day the airport has been targeted in the latest escalation of a 10-week political crisis that has gripped the city.

Protesters physically blocked travellers from accessing flights throughout the afternoon, before battling with riot police outside the terminal later that evening and turning on two people they accused of being spies or undercover police.

But by the early hours of Wednesday morning the vast majority of protesters had left the building and flights began taking off on a more regular basis.

The airport's website showed dozens of flights taking off overnight and listed hundreds more scheduled to depart throughout Wednesday, although many were delayed.

It was unclear whether the airport would again be targeted later Wednesday.

Activists turned their attention to the economically vital airport after weeks of huge peaceful rallies -- and increasingly violent clashes between hardliners and police -- failed to win any concessions from the city's leaders or Beijing.

Click "play" to listen to Flights departing Hong Kong airport after more protest chaos and "Download" to keep this file for educational purpose.

blockade : to stop someone/ something from moving through or along something else - ปิดกั้น, กีดขวาง

concession : a right that is given to a person or group to do a particular activity - สัมปทาน

escalation (noun): an increase or strengthening, often by becoming much worse or more serious, or making something do this - การเพิ่มขึ้น, การยกระดับ, การเลวร้ายลง

hardliners (noun): people who have extreme ideas and who are not likely to change them - ผู้ที่ยึดมั่นในหลักการ

mobilise : (of soldiers, police or other groups of people) to prepare to do something such as fight a war - เตรียมกำลังพร้อมรบ

spy : a person who secretly collects and reports information about the activities of another country or organisation - สายลับ, สายสืบ

undercover : working secretly using a false appearance in order to get information for the police or government - ลึกลับ,ลี้ลับ,ทำอย่างลับ