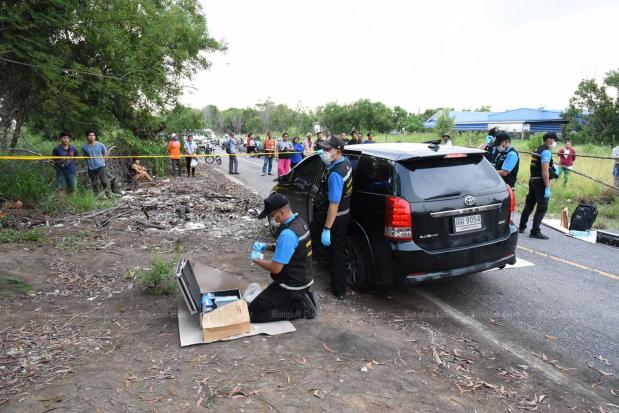 Forensic police collect evidence from a car containing three bodies, all members of the same family, along with a warm charcoal stove, on a side road in Pathum Thani's Lam Luk Ka district on Tuesday. (Photo by Pongpat Wongyala)

PATHUM THANI: Three family members were found dead inside a car parked on a side road in Lam Luk Ka district. A warm charcoal stove was in the vehicle.

The black Toyota car, with its engine running, was parked on Soi Boonyalak when police arrived at the scene at about 4pm on Tuesday.

Three people, including a young girl, were seen inside the locked car. Police called a locksmith to open one of the doors. A man, identified later as Surachet Ninkhot, 36, of Nonthaburi, was in the driver’s seat.

A woman, identified later as Natnicha Ninkhot, 33, and a girl Fasai, aged around 4-7, were found dead in the back seat. The pair were hugging each other, police said.

A warm charcoal stove was also found on the back seat. There were no traces of a struggle. Doctors said the three people had died at least six hours before the bodies were discovered.

Mrs Lamai Arsasee, 55, assistant village head of Moo 14 village, told police that a local resident alerted her on Tuesday that the car had been parked along the soi since Monday night. She and her husband then came to check and found the car. She then alerted the police.

Police said the three dead people were members of the same family, and police had contacted other family members to gather more information. The bodies were sent for a post-mortem examination.

Click "play" to listen to Three family members found dead inside car and "Download" to keep this file for educational purpose.

charcoal : a black substance made from burnt wood - ถ่าน

hug : to put your arms round someone - กอด

locksmith : a person whose job is making, fitting and repairing locks - ช่างทำกุญแจ

stove : a machine or a piece of equipment that provides heat for cooking or heating a room - เตาทำอาหาร, เตาให้ความพร้อม