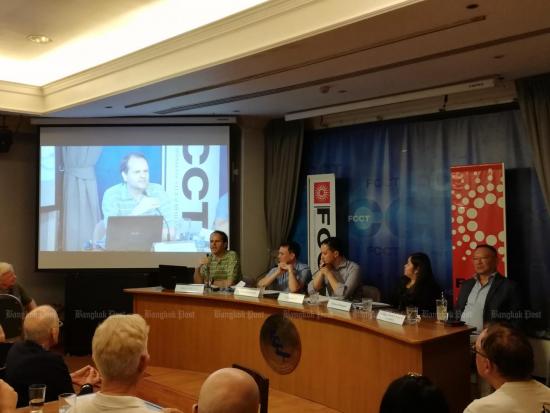 A panel discusses the enforcement of the TM30 reporting rule at the Foreign Correspondents' Club of Thailand (FCCT). Thana Boonlert

Long-term foreign residents of Thailand are confused by the requirements of the TM30 form after a recent forum at the Foreign Correspondents' Club of Thailand (FCCT) with senior Thai immigration officials present on the panel.

On Thursday evening at the FCCT, foreign expats and guest speakers expressed concerns about the lack of clarity and consistency in the application of the TM30 regulation, and the officials said they would do their best to forward the complaints and queries to Immigration Bureau Chief Pol Lt Gen Sompong Chingduang.

However, the officials hastened to warn they could neither promise a time frame for which some of the requirements might be eased or reviewed, or even whether it would happen at all, stressing repeatedly that national security is paramount.

On the books for 40 years but not rigorously enforced until March 25 this year, under the 1979 Immigration Act, the TM30 rule requires Thai landlords who provide accommodation to foreigners to report their presence to immigration within 24 hours of their arrival and departure.

Long-stayers  must also report their whereabouts within 24 hours under another rule called TM28 when they stay at locations other than their registered primary residence, say when they visit another province, or when they return from overseas trips.

Pol Maj Gen Patipat Suban Na Ayudhya, the commander of Immigration Division 1 and the most senior official at the event, cited national security as the main reason for the strict enforcement of TM30.

"A couple of years ago, many cases happened in Thailand. A lot of terrorists came here and did something not good to my country. We have to use the law [TM30] again. Some people don't know whether it is legal or illegal to keep foreigners in their residence.

"You don't know whether foreigners at your house are good or bad guys. That is the reason. We try to save you and my country. The first reason is your safety because you don't know who is a good guy or not," he said.

Nevertheless Pol Maj Gen Patipat added: "We're going to bring the problems to my commanders when we meet to change the rules for good guys like you. But we don't know when we will be done."

Click "play" to listen to Foreigners confused by TM30 rules and "Download" to keep this file for educational purpose.

clarity : the ability to be easily seen, heard or understood - ความชัดเจน

national security : the protection or the safety of a country’s secrets and its citizens - การรักษาความมั่นคงแห่ง่ชาติ

on the books : meaning that a law has existed or exists -

paramount (adj): more important than anything else - สำคัญยิ่ง

retiree : a person who has stopped working because of their age - ผู้ที่หยุดทำงานแล้ว, ผู้ที่เกษียณแล้ว

rigorously : done carefully and with a lot of attention to detail - อย่างเข้มงวด, อย่างเคร่งครัด

terrorist : of someone who uses violence in order to  achieve political aims - ผู้ก่อการร้าย

time frame : a period of time when something happens or must happen - เงื่อนเวลา