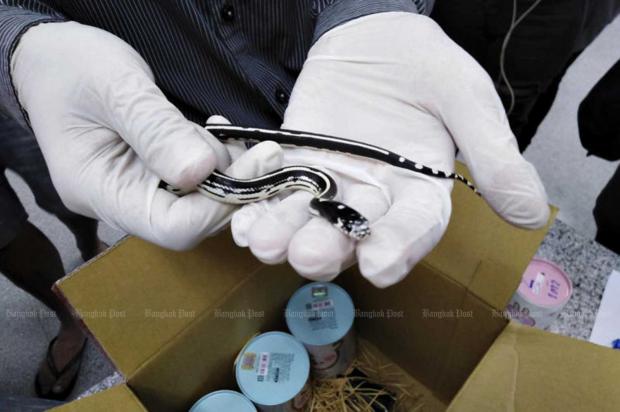 One of the 12 snakes found hidden in two parcels mailed from Taiwan to a woman in Chiang Mai. The shipment was intercepted at the Postal Customs Service Division in Bangkok's Laksi district on Wednesday. (Photo taken from @DNP1362 Facebook page)

Parcels containing 12 small, colourful snakes of various species mailed from Taiwan to Chiang Mai have been intercepted at the Postal Customs Service Division in Bangkok.

Customs and wildlife officials inspected the two boxes at the Laksi office on Wednesday.

The 12 snakes were hidden inside piggy banks.

There were four Mexican black kingsnakes, four hognose snakes, three Californian kingsnakes and one python regius, the Department of National Parks, Wildlife and Plant Conservation said on its Facebook page on Thursday.

Thai media reported that the snakes had a combined worth of about 71,500 baht to collectors, and were  sent to a woman in Chiang Mai province.

The snakes were seized and taken to the National Resources and Environmental Crime Suppression Division, which would find out who was involved in the smuggling of the reptiles.

Click "play" to listen to Snakes mailed in parcels from Taiwan and "Download" to keep this file for educational purpose.

collector : a person who collects things, either as a hobby or as a job - นักสะสม

intercept : to stop and catch something or someone before they are able to reach a particular place - สกัด

piggy bank (noun): a container, usually in the shape of a pig, with a narrow opening in the top for putting coins in, used by children to save money - กระปุกออมสิน

smuggling : secretly and illegally taking goods or people into or out of a country - ลักลอบขนสินค้าหรือคนหรือสัตว์เข้าและออกจากประเทศอย่างผิดกฎหมาย

suppression : stopping an activity from happening, in this case, criminal activity  - การปราบปราม