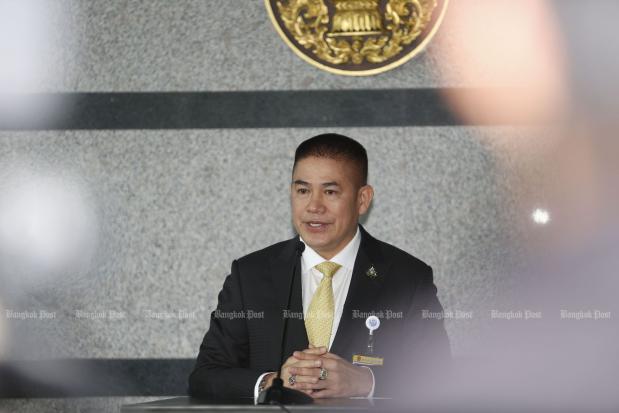 Deputy Agriculture Minister Capt Thammanat Prompow at briefing to explain in Bangkok about his Sydney jail time on July 11. (Photo by Pattarapong Chatpattarasill)

An Australian report has challenged Deputy Agriculture Minister Thammanat Prompow’s accounts about his role in a 3.2kg heroin-smuggling crime that landed him in a Sydney jail in 1993.

The Sydney Morning Herald on Monday published an investigative report titled From sinister to minister: politician's drug trafficking jail time revealed about the case based on court documents.

In July, when news the Palang Pracharath MP for Phayao province might be allocated a minister’s seat emerged, there were questions about his suitability because of his shady past. Some people knew about his jail time in Australia but no one knew the details of the case until now.

The fact that he changed his name several times further complicated the issue and made verifying his claims almost impossible until SMH found details about the case and began investigating.

Deputy Prime Minister Wissanu Krea-ngam had said back then the case did not have a bearing on his qualifications as a minister because a person could not take a ministerial post only when his guilt was decided by a Thai court.

Capt Thammanat also held a briefing in July explaining that the heroin charges against him in Australia were not serious and that he was simply “in the wrong place at the wrong time”.

But the SMH report on Monday shows Capt Thammanat, who went by the name 2nd Lt Manat Bophlom at the time, was among the key members of the gang.

Contrary to what he claimed, Capt Thammanat knew what the content being smuggled was and had earlier helped in Thailand to arrange a visa and bought a plane ticket for a carrier, read the article.

After he was arrested in Sydney, along with his half-brother and two Australian drug smugglers — Sam Calabrese and Mario Constantino, he was charged with conspiracy to import heroin and refused bail.

The report said he first denied the charges and was sentenced to nine years in jail. After that, he cooperated and later confessed.

He was sentenced to six years in jail with a non-parole period of four years.

Besides, the documents suggested he had friends in high places even back then. "Manat’s deep connections in Thailand were underlined when he produced character references from a judge and a police lieutenant-colonel who each said he “always has good behaviours [sic], honesty and is reliable," read the article.

Capt Thammanat and his half-brother were released on April 14, 1997 and immediately deported.

Judging from the timeline in the article, he apparently did not work in Sydney and was not sent back home because of "a policy of the then mayor of not welcoming foreigners with no permanent residences" like he told reporters during the July briefing.

Although he is a deputy agriculture minister, it is a well-known fact that his key role was as a fixer or coordinator to keep the coalition together. He once told reporters that without him the coalition would collapse.

In response to the report, Capt Thammanat said Monday evening it was yet another attempt by the same group of people who tried to discredit him.

"Don't give it any credit. They keep repeating the same story. I can't be bothered," he said.

He added no senior cabinet minister had asked him about this since they knew it was old news and the works of his political opponents.

Click "play" to listen to Australian report challenges Thammanat's claims and "Download" to keep this file for educational purpose.

bearing on : to be relevant/not relevant to something, or to have an influence/no influence on it - การให้ผล

conspiracy : a secret plan by a group of people to do something bad or illegal - สมรู้ร่วมคิด

contrary : completely different or opposed to something else - ตรงข้าม

discredit : to cause people to stop respecting someone or believing in an idea or person - ทำให้สูญเสียความเชื่อถือ,ทำให้เสื่อมเสียชื่อเสียง

drug trafficker : someone in the business of buying and selling drugs illegally - ผู้ลักลอบค้ายาเสพติด

guilt : the fact of having done something wrong or committed a crime - ความผิด

heroin (noun): a powerful illegal drug made from morphine, that some people take for pleasure and can become addicted to - เฮโรอีน, ยาเสพติดร้ายแรงชนิดหนึ่ง

minister : a member of the cabinet, the group of government ministers who make and approve government policy - รัฐมนตรี

opponent : someone who disagrees with you or who is competing against you - ผู้ไม่เห็นด้วยกับ, ฝ่ายตรงข้าม

parole (noun): permission that is given to a prisoner to leave prison before the end of their sentence on condition that they behave well - การพ้นโทษอย่างมีเงื่อนไขหรือทำทัณฑ์บนไว้

sinister : threatening to do harm or to do something evil - เป็นลางร้าย,

smuggle : to take drugs, money, people, etc. to or from a place secretly and often illegally - ลักลอบนำเข้า