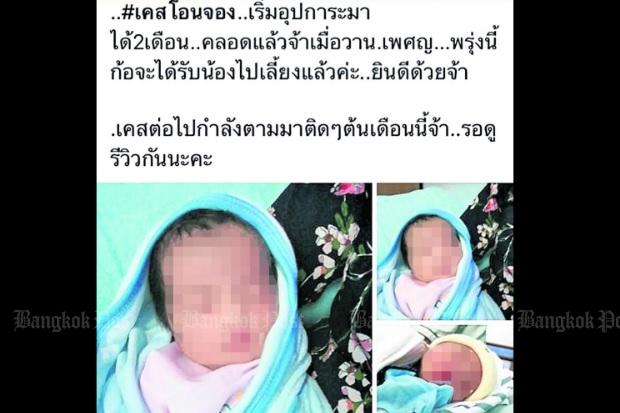 Police have launched an investigation into what is believed to be the sale of newborn babies online with website administrators suspected of brokering the illegal business.

The Anti-Human Trafficking Division is examining a report that people are running businesses in which newborns resulting from unwanted pregnancies are up for sale on Facebook pages.

"If that is true, it will be a very serious case of human trafficking," deputy department chief Pol Col Mana Klipsattabut said on Tuesday.

Pol Col Mana said it was unclear which Facebook page started the baby trade. Investigators have found that at least one website thought to be involved in selling babies has been shut down, he added.

According to police, some Facebook pages advertised babies to attract people wanting to "adopt" them.

The advertisements were exposed on a Facebook page called "DOKJIK V.10", which took from another web page pictures of a two-month-old baby girl who was about to be "adopted" after she had been "booked" by a buyer.

The message attached to the pictures also said another "adoption" was imminent. The message was condemned by netizens.

"People dared to announce they wanted people to adopt babies through a purchase deal that seems to be concluded more easily than selling cats and dogs," said the Dokchik V10 page administrator.

A reply posted by a woman who was supposedly three months pregnant says she fell pregnant by accident and was not ready to have a baby.

"Please help me contact a person who can adopt my baby. I'm worried because abortion is a sin," the woman said.

Click "play" to listen to Police probe babies-for-sale websites and "Download" to keep this file for educational purpose.

abortion : a medical operation in which a developing baby is removed from a woman’s body so that it is not born alive - การทำแท้ง

adopt : to take someone else’s child into your family and legally make him or her your own child - รับเลี้ยงเป็นลูก

netizens (noun): people who use the Internet a lot - พลเมืองเครือข่ายคอมพิวเตอร์

pregnancy : the state of being pregnant, having a baby developing inside - การตั้งท้อง

sin : an action, thought, or way of behaving that is wrong according to religious laws - บาป

trade : the buying and selling of goods and services - การค้าขาย