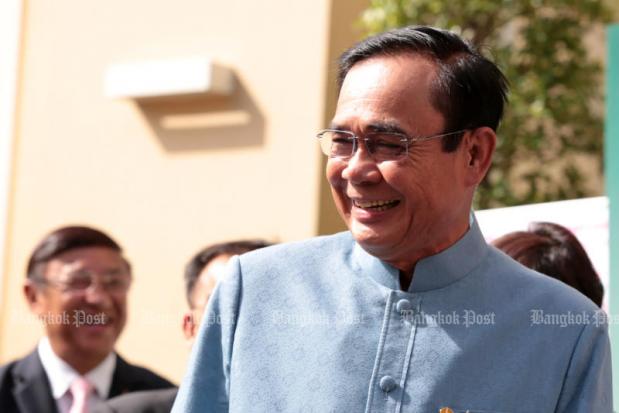 The Constitutional Court on Wednesday threw out a complaint about the incomplete oath of allegiance made by Prime Minister Prayut Chan-o-cha. (Photo by Chanat Katanyu)

The Constitutional Court on Wednesday rejected a petition lodged by the Ombudsman on the incomplete oath of office recited by Prime Minister Prayut Chan-o-cha in July.

The court resolved unanimously that it was "not in its authority" to make a ruling on the oath-taking during the cabinet swearing-in ceremony before His Majesty the King.

The petition was lodged through the Office of the Ombudsman on Aug 20 by Panupong Churak, a Ramkhamhaeng University student, who cited Section 213 of the charter on the right of citizens to complain if they consider their constitutional rights are violated.

Mr Panupong claimed the incomplete oath could invalidate the cabinet's formation and its statement and implementation of policy, affecting the government's ability to work for the people's benefit.

On Jul 16, Gen Prayut led cabinet ministers at the swearing-in ceremony before HM the King at the Ambara Villa in Dusit Palace.

However, the prime minister failed to recite the final sentence of Section 161 of the constitution, which requires the oath-taker to uphold and abide by the constitution.

However, the court said "the oath-taking concerns an action which reflects a 'specific relationship' between the cabinet and the King and is considered a political issue under an act of government, stated in Section 47 of the organic law on Constitutional Court procedure.

"The court thus cannot accept the petition for consideration," it said.

The court went on to explain that after Gen Prayut and his cabinet completed the oath-taking, His Majesty the King responded by offering his moral support to the government in carrying out its duties in line with the oath it had made.

Click "play" to listen to Court rejects oath petition and "Download" to keep this file for educational purpose.

abide by : to follow a rule, law or instruction - ทำตามกฎหมาย

constitutional right : something that you are legally allowed to do or have under the constitution - สิทธิตามรัฐธรรมนูญ

oath : a formal promise, usually, but not always, in a court of law - การกล่าวปฏิญาณตน

ombudsman : an official whose job is to examine and report on complaints made by ordinary people about companies, the government or public authorities - ผู้ตรวจการของรัฐสภา

petition : a request of someone in authority to do something - คำร้อง

recite (verb): to say something that you have learned or memorised - อ่านออกเสียง

swearing-in ceremony : an official ceremony in which someone beginning an important job formally promises to do their duty - พิธีสาบานตนเข้ารับตำแหน่ง