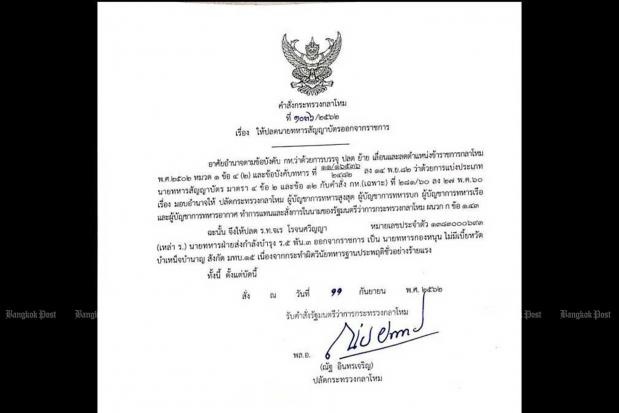 The Defence Ministry order discharging Lt Jarae Rojanasawinya dishonourably from the military for serious disciplinary violations and gross misconduct. He is accused of raping a 14-year-old girl, a sergeant major's daughter, several times since March. (Photo by Wassana Nanuam)

An army lieutenant accused of raping a fellow soldier's 14-year-old daughter has been dishonourably discharged from the military.

The Defence Ministry ordered the dismissal of Lt Jarae Rojanasawinya of the 3rd Infantry Battalion, 5th Infantry Regiment, without a pension, finding him guilty of serious disciplinary violations and gross misconduct.

The family of a 14-year-old girl has accused the lieutenant of raping their daughter on several occasions and videotaping the abuse to blackmail the girl into silence.

The family has filed a complaint with police in Songkhla. The alleged rapes had occurred since March this year, Thai media reported.

The girl, daughter of a sergeant major first class in Songkhla, had reportedly suffered severe depression and tried twice to commit suicide.

The man denied raping the girl and in turn accused the girl's mother of twisting the facts to help her sergeant major husband, whom he accused of firing shots in a military camp and attempted murder.

The sergeant major told the media that he fired shots into the ground to prevent the lieutenant from firing shots at him.

Both men were suspended from duty after the incident.

Click "play" to listen to Army lieutenant accused of raping girl, 14 and "Download" to keep this file for educational purpose.

abuse (noun): cruel, violent or unfair treatment, especially of someone who does not have the power to prevent it - การข่มเหง, การปฏิบัติไม่ดีต่อ

blackmail (verb): to force somebody to give you money or do something for you by threatening them, for example by saying you will tell people a secret about them - ขู่เข็ญเอาเงิน

disciplinary : related to the punishment of people who do not obey the rules - การลงโทษเนื่องจากการฝ่าฝืนวินัย หรือระเบียบ

dismissal : forcing someone to leave their job - การไล่ออกจากตำแหน่ง

pension : money that someone regularly receives after they have stopped working because of their age, paid either by their company or by the government - บำนาญ, เงินบำนาญ

suspended : not allowed to participate or to do a job for a period of time -

twist : to distort; to falsely change the true facts of something - บิดเบือน

violations (noun): the breaking of rules or laws - การฝ่าฝืน